Why the medicine stopped working

Our economic woes haven't been solved with supply-side tax cuts or Keynesian stimulus, but why? Both cures depend on redirecting money, but lack of money isn't the root of our economic problems. People have buckets of money to invest. Our stock market sloshes around $69 billion every single day. People (including me) have poured $11.8 trillion into mutual funds. Money sloshes into oil futures, CDOs, ETFs, REITs, hedge funds, etc. Everyone is trying to get good return on their bucket of money. Sometimes people are being enticed with slightly higher returns or considerably higher returns to invest with Bernie Madoff or in offshore Icelandic banks or in well-rated but not-so-solid American mortgage-backed securities.

OK, that isn't happening today. But it was happening in the 2000's until about 2008. Some of that money (including some of mine) vaporized in 2008-2009. But much of it was replaced somehow, maybe with quantitative easing (QE) cash, maybe with money we had shipped to China, maybe with money that was sitting on the sidelines. I don't know where all that replacement money came from, but the Dow soared from a low of 6626 in 2009 to a high of 12810 in 2011.

I may not know where all the money came from, but I can guess what it means. Our economy, and economies around the world, are going to be unusually susceptible to financial bubbles. Since around the mid-1990's, we've had a tech bubble, a housing bubble, and an oil bubble. Maybe there's a stock bubble right now. Maybe there's a gold bubble.

With all the available money, why isn't there more investment and growth? Because there aren't strong new ventures to invest in or expansion opportunities, particularly in the US, but also elsewhere in the world where bubbles have popped. Demand is strongly depressed in the US, where people and business are belatedly paying down debt instead of spending and investing. It's not wrong for people and business to do this, because there was too much debt burden. But how can our economy start growing again?

I wish I knew, or wish that old cures (supply-side or Keynesian stimulus) showed signs of working. We might be in for Japan-style economic drift. The only hope I have is that better fiscal management of the federal budget will encourage optimism and new investment. I'd love to see some manufacturing return to the US, new manufacturing that starts small and local with potential to grow, and export-oriented manufacturing based on our natural resources like farming and forests.

To me, this seems like the kind of organic growth that can work... if the environment is right. That means regulation that is light enough to both protect and encourage. We also need taxation rates that don't unduly add to the risk or subtract too much from the reward. However, decreases in taxation need to be measured against the loss of the revenue. Perhaps easing regulation is the more fruitful approach.

Conservatives are saying "Duh!" but that's OK, because this is more a message for liberals. If you want a stronger economy with more jobs available, get over your instinctive distrust of business. What suffocates business suffocates our economy and suffocates our country. The purpose of regulation isn't to tie business up in knots, but to keep people safe. Use it for that purpose only! Abusive regulation is no one's friend. 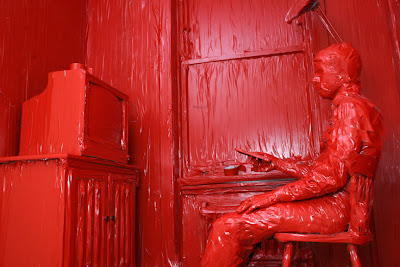 Posted by ModeratePoli at 7:26 PM

Lots of posts in just a few days. Lots of material to work with lately, of course, and not a little bit of pent-up thoughts no doubt contributed to the explosion.

I would hope you'd consider a couple of things, particularly on this topic: basic economic theory.

1) "Regulations" are mostly written by and to favor the regulated. They usually set forth minimum standards of behavior -- which are set artificially low and are full of loopholes -- to allow the regulated to pass-off their costs to others so that they get to keep more of the money they make. Those regulations also are typically designed to prevent entry to the markets of the regulated, so they can maintain their market shares and produce very high entry costs for potential competitors.

Consider environmental regulations. The regulated hate it, and seek to minimize requirements and enforcement. Preventing polution costs lots of money, as would defending against lawsuits. If those regulations were relaxed, they could save the money and could just make the rest of us deal with the ugly, sickening mess. It's not so much different for financial regulation.

We need MORE regulation -- i.e., policing of those who would gleefully and greedily make others pay for their messess -- and must be forever diligent. There's a reasons stores have security guards, and it's not to protect the patron in the store. It's to protect the store from theft. The whole country and world is OUR store, and there are people everything looking to take advantage if someone isn't watching, whether it's the inside-trader, the land-developer, or the drug kingpin. We just have to police all of the potential crooks, not just the drug kingpin. They all cost the rest of us a fortune.

2) Economics 101: Government borrowing = taxing = printing money. All of them are exactly the same. They are all a form of taxation. The GOP's arguments on this subject are so effective, yet so false, that we have distorted the argument. If government spends money wisely, on, say, building public works and effectively educating the workforce, we get productivity and standard of living gains. If the government spends money foolishly, on, say needless wars or defense or a million security guards to make sure people don't bring bottles of water and a tube of toothpaste onto a plane, productivity goes down and we lose.

The only choice now is to build our way out of the stupid decisions accumulated over a couple of decades, and make sure we don't make the same mistakes again. I have little confidence this will happen. If you'll allow the cliche, the USA has now jumped the shark. Our economics and political institutions are so wrapped up in pointless, stupid plot twists ("The government is strangling us so we're not free to grow!! and "Obama's a socialist anti-colonialist and not even a real American!!") that it's not worth investing in. If the USA were a TV show, it would be cancelled.

Canada is looking better all the time.

Good points, but I still think there's some truth to stories about overregulation. But it can be hard to sort the truth from the lies, as the milk spill story shows. What prompts politicians to lie like this?

I'm not against all regulation. As I said, I think we need it for safety--the safety of our lives, our health, our environment, our money.

I'd love the hear true stories of overregulation because that would indicate where to cut.

Thanks for posting. -M.P.