The man who should be king 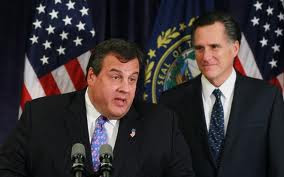 ... actually, he should be president. That is my gut response to this video of Chris Christie. (Disclosure: I have a weakness for unvarnished talk, preferably with occasional profanity.)

At 10 minutes in, he gives Obama the same advice I'd give Obama if I could get on Meet the Press. Take Simpson-Bowles off the shelf (saying the politician equivalent of "I made a mistake"), and back it hard around the country and in Congress.

Watch the whole video. Highlights are that Christie would join the ticket with Mitt Romney, how he's handled canceling a huge transportation project, and how he's lowering New Jersey's highest-in-the-country state taxes.

Update 1/22/12. I love this guy. Partial headline from Google news:

Posted by ModeratePoli at 12:30 PM

Yes, Christie is great on this stuff. But Republicans are also going to have to learn to live with a reduced US military presence in the world -- we just can't afford it any more. I don't expect that Romney will get much love from Ron Paul supporters unless he comes to this realization.

In other speeches, Christie has pointed out that Americans will only accept budget cuts if they see it as part of a shared sacrifice. He's right about that -- but it's also a sacrifice that has to be shared equally by the parties. We're not going to balance the budget by only cutting democratic priorities.

Reducing the US military is the issue that makes Ron Paul persona non grata to most of the Republican party, at least it seems that way to me. I wonder if Rand Paul would have won if he pushed this as much as Ron does.

Or do you think it's Israel more than the military in general?

I'm amazed that the Tea Party are such sheep on these issues, as though they've never considered how much it costs to have this military, especially war after war. I guess talk radio has turned them into zombies who have the illusion of thought. (Not that any one group has a monopoly on unthinking, puppet voters.)

I think you're right, defense policy is the issue that divides Paul from the base more than any other. His problem is largely that he uses what is perceived to be leftist rhetoric on this issue, a mistake his son avoids.

Unfortunately, the neocons still have a lot of sway over he zombies. And I blame the right wing media for making it so easy for Newt to dupe them (If you watched his victory speech, it seems that "Saul Alinsky-radical" rhetoric is the "brains" these zombies crave.)

Unfortunately, ModeratePoli, Governor Christie followed up reasonable political advice with an assinine remark that civil rights for blacks in the South should have been decided by referendum of the voters--completely ignoring the facts that 1) Blacks were largely excluded from the electorate and so couldn't vote on the issue; 2) White voters in the South probably would have voted overwhelmingly to continue to deny their black fellow-citizens the vote; and 3) civil rights aren't subject to confirmation or denial by majority vote.
My reading of Christie? Even a fool says something intelligent once in a while.

I also find it frustrating when people deny the necessity of the Civil Rights Act. How often is the denier someone other than a white man, or maybe a southern white woman?

But I disagree that a fool says something intelligent once it a while. It may happen, but it may not.

It's certainly possible Christie's idiot quotient is higher than I thought since I haven't been following him that much. That's one reason I hedged by writing that it was a "gut response." To give a politician a bigger plug, I'd need more data (because I'm a nerd).

Or it could be that even an intelligent person has the capacity to say something so mind-numbingly foolish.