We made the wrong choice

This is probably true much more often than we admit. I won't go into all the personal mistaken choices because their consequences are limited. But in politics, it's definitely worth talking about.

A slogan for this election is that IT'S THE MOST IMPORTANT ELECTION OF THIS GENERATION. (Note, there's now a lot of pushback against that idea, thank God.) When a lot of people were screaming that during the GOP primary, I considered the question seriously, and decided that the most important election of this generation was in 2000 (Bush vs. Gore). Unfortunately, we got the wrong one. I'll argue that with anyone, and the sane ones will be agreeing in about ... 2 minutes, or a lot less. As I don't want to waste my efforts on the insane ones, I don't have the argument very often.

So, we made the wrong choice in 2000. Actually, the popular vote favored Gore, but not enough to swing the electoral college in basically a 48%-to-48% tie.

Another wrong choice preceded that. The GOP establishment chose the wrong Bush brother. Jeb Bush was generally acknowledged to be the smarter and more serious one. But George Bush managed to block him out and sign up a lot of early supporters. Or perhaps I should give in to my speculation and say Karl Rove did these things.

(Side note: After Karen Hughes' statement that George Bush was intelligent, I withheld judgment for at least two years. Never in that time did I see signs of above-average intelligence from Geroge Bush. So when I say that he's not intelligent, or that he's an idiot, it's based on observation, not on bias. I'd trust him to deliver mail or teach high school or build web pages, but he wasn't smart enough to be POTUS.)

Why did we end up with the dumber Bush brother? Well, if you were a conservative businessman and you wanted someone malleable rather than independent, wouldn't you choose George over Jeb? Now, I live about as far from Texas as an American can, so I have no idea who are the powers behind the Texas GOP, but there's a track record there of not-so-bright governors, as Rick Perry reminded us. Someone, maybe more than one, maybe a group decision, chose George Bush as Republican nominee in 2000. Whoever you are, THANKS A LOT FOR SUCH A SHITTY CHOICE. 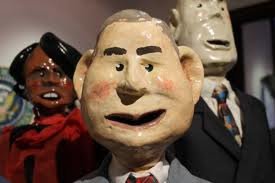 
Extra: The occasion for this post is Jeb Bush's announcement that he'd accept 10-1 spending cuts to tax increases. What a RINO.
Posted by ModeratePoli at 2:48 PM