I don't think those are Romney's motives anymore. Nor do I consider him a good man anymore. I've watched, with regret, as he pandered to the baser elements of the GOP. I realized today that I've been witnessing something I didn't expect to see. Mitt Romney, this devout Mormon and formerly good man, has sold his soul for the presidential nomination.

I didn't think this would happen with Mitt. Plenty of politicians don't seem to have a soul anymore. Others make compromises, but they keep enough of their soul to remain recognizable. Romney, who was my governor, isn't recognizable anymore. He used to be fair, polite, and reasonable to work with. Now he's a liar, still polite occasionally, but has totally forgotten what pragmatism is. It's sad that his ambition was so great that he gave up his best attributes for ambition's sake.

When I wrote this on the Atlantic website, Lars_the_pianist wrote this reply:


When I think back, Dubya was fairly popular governor in Texas. He went and polled the state for top priorities and found many Hispanics wanted better education for their kids with more push on learning English.  Dubya advocated for that.

.... then he became President and the GOP neo-con machine pushed him to stop being the "compassionate conservative" and be the perpetual wartime president and the profligate tax cutter that grew government spending.

It seems to be very difficult to project what a GOP governor will become if they enter the Presidential fray. The internal pressures in today's national GOP must be really immense. Mitt is already being transformed from the Massachusetts pragmatist to "the man with no past."

That sums it up. 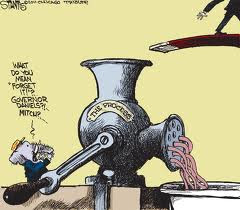 So, what do you think about PR as Romney's running mate? Enquiring minds need to know!

I agree with your assessment of Romney, ModeratePoli. If I could trust that President Romney would be like Governor Romney, I might vote for him, just to break the deadlock with Congress so something could get accomplished. But Candidate Romney has repudiated Governor Romney, and his pick for VP confirms that he won't revert to (what I devoutly hope is) his true self, should he get elected President.