Values and Judgment: Why your opponents aren't idiots

If you have a strong sense of where this country should be going, what's wrong, and what needs to change, you are probably quite frustrated that the rest of the population doesn't feel or think the same way. Maybe you've speculated why the other folks just don't get it, like these samples I've collected from today's web page comments:


"I would take the word of a man professed to be bound to ethical laws than a stinking liberal journalist."

"If you had a brain, you'd be dangerous. Fortunately for us all, you don't and you aren't."

The easiest explanation for why your opponents hold different opinions is that they're stupid, corrupt, ignorant, or evil. Such vilification is a reflection of the writer's anger, laziness, or maybe just their failure to acknowledge anything worthwhile on the other side.

So why do your opponents have different views? The most likely explanation is that they have different values. To truly understand why your opponents disagree with you, you have to seek out and understand their strongest reasons for those positions. This is not just a bunch of relativism. Instead, it's respecting that we are dealing in the realm of competing ideas, and ideas deserve due consideration. What are the advantages of position A, disadvantages, possible good outcomes, risks? "A" can be your position, a well-known position of the other side, or something new.

When researching a viewpoint, look for its strongest arguments, not its weakest. No doubt some of your opponents have already published some good explanations somewhere on the web, so seek these strong voices. They aren't necessarily partisans, but thinkers. Have the discussions with those people. Avoid the partisans, the talking pointers, the dogmatists, the bomb-throwers. You won't learn anything from them.

PS. Some of your opponents will be stupid, but don't judge them all by the worst case. That would be no fairer than this picture: 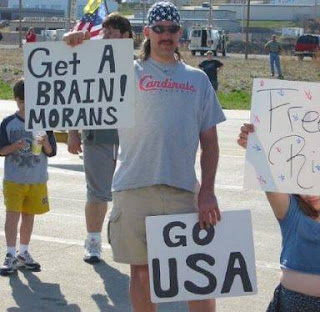 Update: I continue my analysis of different opinions and values in What they don't tell you and Judging the Values.There's discussion of different moral systems here.

Posted by ModeratePoli at 7:25 PM