All the liberation movements here in the US have moved people from the "other" column into the "us" column. Blacks, Native Americans, other religions, women, gays, lesbians, the handicapped are no longer outsiders. I think this makes for a better world. That's why I argue with people about going back to old-fashioned values, because a lot of it was ugly and hateful.

However, among the positive trends on acceptance, there is at least one negative trend: conservatives have allegedly been made into misfits on campus, in classrooms, and in academic scholarship. At least, that's what I thought I would find. This story is less than I thought it would be.

This is what I found. Conservatives feel outnumbered. Again, the problem of unexpectedly being the minority. But most colleges have conservative groups and traditional religious groups. I didn't see any reports of these groups being mobbed, thrown off campus, members beaten or threatened. The sum total of wrongs:

Does this look really thin to anyone else? I have heard of worse incidents in the past--speakers shouted down, vandalism of signs and literature. That's worse and crosses the line of civility and perhaps legality, but is incredibly mild compared to what happened to Matthew Shepard or James Chaney, and doesn't seem to be happening often.

So, no, I didn't find lots of reports of intimidation of conservatives, unless simply being in the minority is more intimidation than you can handle. There are plenty of resources if you are a conservative on campus. You can report wrongs to this blog. There are probably other well-funded organizations to help you too.

What is the problem of being a conservative on campus? It is that you're verbally intimidated, given lower grades, socially isolated? Or is that you're uncomfortable being so clearly in the minority? That happens to a lot of people--try being a woman in the hard sciences, a man in nursing, black almost anywhere. It will not feel comfortable at first. But I didn't find evidence that conservatives' fear on campus went beyond fear of being in the minority. Campuses are safe places to be conservative, but you probably won't be popular. Deal with it.

I live in a college town with a lot of progressives and old-line liberals, and just a few conservatives. In my family, it's all liberals. As a moderate, I am the outlier. Living with liberals, though, is not so bad. They may belittle and scorn, but they will back off when you point this out. So after they exercise their free speech on some liberal mantra, you can exercise your free speech on your viewpoint. And if they mock you, call them on it. It's not so hard. Stop whining and start standing up for yourself. If there are problems after that, then tell me about it. 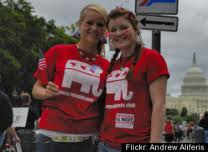 Extras:
Professor mass emails angry response to Republicans. Not good, but the conservative columnist says she shouldn't have a job.
Good comeback to conservative complaints - they don't want to read books, etc.
Philosophy professors critique complaints. One problem is that conservatives are often dogmatic on moral issues, making discussion of different philosophies difficult.
Complaints about lack of diversity among professors - anecdotal

Posted by ModeratePoli at 10:32 PM