Getting Acquainted with Your New Minority Status

The white, christian majority in this country, being the long-time majority, doesn't have the experience to handle minority status graciously. I, on the other hand, grew up in a family that was proud of its recent immigrant history, in an area that had seen waves of immigration. So I have great appreciation for the ethnic mixer in this country. But I don't have a clue what it feels like to be in the majority.

Maybe I can help the white majority make a graceful transition into minority status. First some reassurance about being a minority:
So if the biggest problem you'll encounter is being uncomfortable, let me help you some more with my guide to how to be a well-behaved demographic minority:
Please follow my advice and take my word--it is entirely possible to be a happy, healthy minority in this country. It's part of what makes America great. 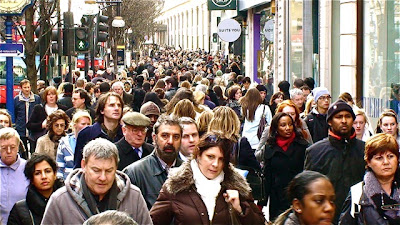 EXTRAS. Being a minority:


"Sometimes it can be alienating, at work, at school, at social events when you are the only minority there... It's always something that's on your mind... Mostly it's like being anyone else though."

"... it is like a sentence because we are stamped with the word "minority" as though we aren't apart of the "acceptable" population."

"I have faced hatred, and insults based upon religion."


"This is why it is more important than ever for whites to recognize this and make a conscious effort to preserve and protect our race, culture, and heritage before it is eventually gone."

"...close the border already!! we need a passport to leave our house!!"


"You have this perception out there that whites are no longer in control or the majority."

"Will they suffer a similar fate to that of the whites in South Africa?"

Posted by ModeratePoli at 7:56 PM

You will never "get acquainted" with being a minority in America. I'm a Black man and I HATE always being the only Black man at work. YTs have no idea how limiting and draining it is to be "the only one" all the time. But one day you will. It is not fun.

I apologize for the glib headline. I know as a YT that most of the time I don't have to deal with overt prejudice or the question of covert prejudice. The times I have, yes, it causes me terrible anger, resentment, and anxiety.

But do you belief that one day the white majority will be a minority, since you say "one day you will"?

I look forward to that day, not just because it's humbling (which everyone needs) but because I hope it's illuminating.

When Whites become a minority, we will be much more ethnocentric. I am personally acquainted with recent immigrants from Taiwan and Vietnam, and I like them very much. However, they are casually racist -- extremely so, particularly against African-Americans. They are shocked when they see black-white interracial couples and ask me how this can possibly be legal.

This is the future for a White minority -- we will become very insular, very racist, and we will dream of a day when we send the guests back home, and punish the traitors who invited them here in the first place.

@Jeronimus,
The racism of other people is a reflection on them and their upbringing. Many homogeneous countries haven't learned the pitfalls of strident racism the we have.

I disagree that whites will become insular as they become a minority. Over the history of this country, it's become acceptable to socialize and marry with a wider number of ethic groups. At first, people would marry almost exclusively within their ethnic group. Then it shifted to within their religious creed, then anyone who was white. Now there's a lot of marriage between white, Asian, and Hispanic, and a moderate amount between blacks and other groups too. Becoming insular hasn't been the trend. I could say why this is good, but I'll just stick with it as a historic fact.

As for punishing traitors, that may be the talk of a small minority, but not the vast majority. So that's not going to happen either.

And I happen to love my black neighbors. I'm not going to stand by if anyone tries to split us up. I'm going to be out on the streets, no matter what the effect on my family. I decided that a while ago. I probably won't have to (for the reasons stated above), but I'm not going to waver. A lot of people feel that way, at least in my town.