GOP releases a tax plan outline summary thumbnail. In keeping with GOP inability to deal with reality including policy making, the tax plan is 5 pages stretched onto 9 pages. It doubles the standard deduction! Cheers! And quietly takes away exemptions. It's the usual cake for the wealthy with a bit of frosting for the middle class. A good list of misleading sales pitches.

Admitted fake news author dies.  He wasn't trying to be a con artist, but rather a satirist. But, according to him: "[Trump's] followers don't fact-check anything — they'll post everything, believe anything. His campaign manager posted my story about a protester getting paid $3,500 as fact. Like, I made that up. I posted a fake ad on Craigslist."

Fake news generators on Facebook outed by Facebook. At some point, most reality-based GOPers will have to stop pretending that there wasn't Russian interference in the US election. Facebook announced more than 3000 fake ads were purchased by accounts that appear to be Russian.

The new world order that didn't happen. Interesting thought. The world was supposed to gradually accept American values by acclamation amid peace and prosperity. Ooops, it didn't happen. The inevitable wasn't inevitable.

Amazing short summary of Islamic terrorism. Maybe it's too simple, but it holds together in my opinion.

The media misreports probability. The problem includes how media reports weather predictions and the 2016 election predictions. The fact of uncertainty isn't clearly conveyed.

Critique of  The Bell Curve. The 1994 book contained the thesis that blacks were genetically cognitively inferior to other groups. The book caused an uproar. Cognitive scientist formed a committee and wrote this critique of what was wrong with the book and its handling of evidence. I've had to refer to this critique several times. 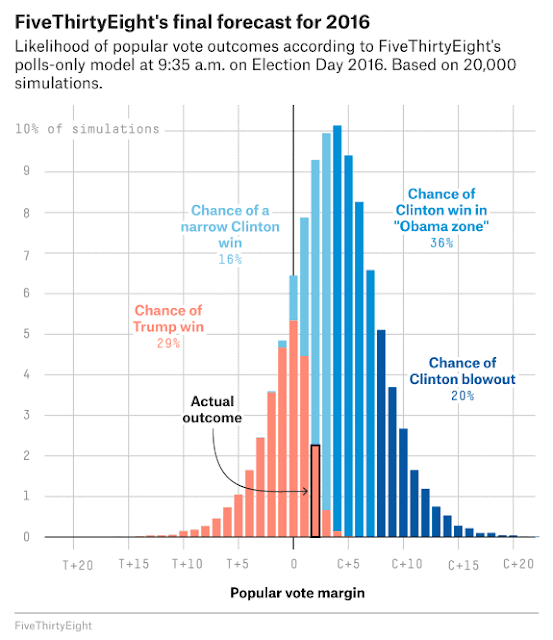 Posted by ModeratePoli at 8:57 PM No comments: