If one person comes out with a story about Brett Kavanaugh with a lot of gaps in the details and no witnesses, it's not too credible. When the count gets up to four people, it becomes more credible. Now there are over 8 people on the record with their names and what they witnessed. It includes drunkeness, aggressive behavior, and sexual aggression toward women. And that doesn't count numerous people who wouldn't release their names.

I find the charges against Kavanaugh plausible, but that doesn't mean much. It means he might well have been there and he might physically have been able to do the actions he's accused of. I don't believe arguments like 'it's not within his character' or 'she's so honest there's no way she's lying.' Those arguments aren't convincing to me unless I peronally know the extreme credibility of the character witness. Why? Because 'it's not within his character' has been said about too many serial killer, serial molesters, etc.

So the charges are plausible. It's also plausible that Ford is lying or mistaken. That's why the investigation is important. It's not going to be easy. Many people are not going to want to talk about their wild times in high school or college. If they're conservatives, as many of Kavanaugh's supporters are, they may not want to reveal his dirty past for political or tribal reasons. If they were friends, they may want to remain silent and loyal. That makes it hard for Kavanaugh to clear his name. The suspicions will linger. There's no way around that. It's an injustice built into suspicion, and it's impossible to remove it from people's brains.

If Christine Blasey Ford is lying, she figured out quite a cunning lie to tell. It's one that fits the pattern of Kavanaugh's partying. She's obscured details like where and when to make it harder to disprove. But she's done it in ways that are somewhat believable. I do have a couple problems with her story, which is her not remembering how she got to the house and how she left. Particularly not knowing how she left, I'm left wondering if she went back into the party. I wonder if she's leaving out details that which might undercut her story of how traumatized she was. It's also possible that she dissociated, and lacks the memory for that reason. Or there could be other reasons her memory is poor. I'm not an expert on memory, and I'm not sure anyone is expert enough to sort this out. Of course, a strong reason to conclude Ford hasn't fabricated the story is that she told her therapist and husband years ago, with therapy notes to confirm that. It's hard to fabricate a lie in advance.

This is one of those times when an infallible truth serum would be so helpful. I wish I could ask them both, and get the real story, not the one sorted and selected for the audience in the American public. But that's not possible, and we humans are such cunning animals. We aren't to be trusted. So what to do? We're left trying to make judgments in our imperfect ways. That's life. 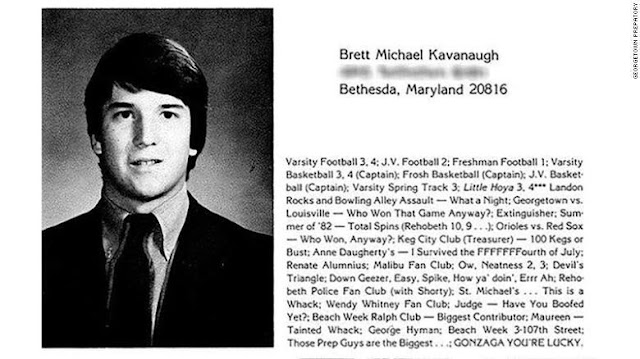 Extras. This will be very long because I did a lot of research and want to save the info I found.

Transcript of Ford's and Kavanaugh's testimony. Julie Swetnick's sworn complaint. And another from another client of Avenatti. Decoding Kavanaugh's yearbook entry. Lots of references to sex and especially drinking. A letter from Kavanaugh to his friends about Beach Week, with lots of details and insider info. About Mark Judge's books.

Tucker Carlson and very sloppy argumentation. Weaknesses of Ford's story, and ignoring its strengths and supporting info. Biased assessment. As counterpoint, defending youthful mistakes--of privileged white guys, but not others.

Run down on two of the allegations. Rather complete at the time, so good detail. Private school culture at that time and place. Some sources fully identified. Also this article, which talks about gang rapes which weren't called gang rapes. A first-hand account by the author, so a named eye-witness. However, the parties are from the mid 1980s, so a few years after Kavanaugh graduated.

More people remembering Kavanaugh very drunk.  And more, with a follow-up. Others asked not to be named. A police report of Kavanaugh involved in a bar fight while at Yale, discrediting one of his character witnesses. Witnesses about Kavanaugh: Liz Swisher, Christine Keating, Lynne Brookes, James Roche, Charles Ludington, Elizabeth Rasor, Daniel Livan, Sean Hagan, Kerry Berchem, Kenneth Appold. Other named participants who should be thoroughly interviewed (which didn't happen) Mark Judge, Leland Keyser and Patrick Smythe. Also Renate Dolphin because she might have some very interesting stories to share.

A very critical analysis of Kavanaugh's testimony with numerous lies and evasions pointed out. Plus a companion piece on why Kavanaugh would be a harsh, rotten justice.

Inspired by Ford, a woman reveals her rape at a frat party many years ago. Is it fair for him to have to face consequences so many years later? Is it required that the survivor just let it go?

The very rigid rules for reading the FBI report, which forbids 'characterizing' the information. Looks like the FBI investigation is brief, limited, and a whitewash.

Update 11/5/18. A Republican consultant remembers being anger and aggressive at a conference meeting with Ken Starr. She's very disappointed with GOPers sweeping it under the rug.

Posted by ModeratePoli at 9:23 PM 3 comments:

The Washington Times was sued about a Seth Rich story it published, and has had to settle the case with a full retraction. That's how much work it takes to get most right-wing media outlets to correct their lies--a court case. And this might have been lucky too, because the Times made the mistake of making claims about Seth Rich's brother, who was the plaintiff.

So whereas the Times claimed that it was 'well known in intelligence circles' that Rich and his brother leaked the DNC emails, it turns out that's completely wrong.

So, is that the only punishment? The settlement is sealed, so we don't know if money was involved. However, there is no report of the Washington Times firing anyone for the mistake. That makes it like the other lies from other right-wing outlets. No one gets fired for birther nonsense, or Shirley Sherrod, or any other fabrication. There's basically no downside in conservative media for lying because no one is held to account. Yet again. 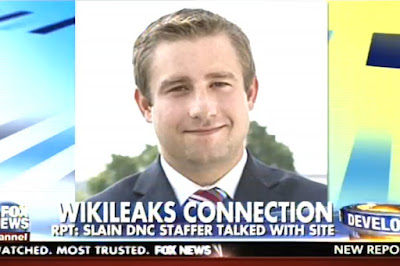 Image: the must trusted foxnews.com

Update 4/22/19. I'm still seeing comments from people who believe the Seth Rich story. It's similar to those who still believe the Pizzagate story, except a bit more plausible. This article describes how Russians laid out the misinformation and set up the discoveries of that misinformation. Right-wingers are such useful idiots for the Russians.

Update 7/23/19. Even more about how the Russians planted fake news pointing to Seth Rich as the DNC leaker, and how conservatives lapped it up. Oddly, and casting some doubt on the thoroughness of the reporting, there is no mention of the Seymour Hersh tape and its role.

Update 8/17/19. This article points out that conservative media pushed the Seth Rich lie, and they deserve the blame. I can't argue with that.
Posted by ModeratePoli at 7:45 PM No comments: