So, President Trump, huh? I went into the election too comfortable, obviously. Also obvious is that my brother's predictions didn't pan out. Election night wasn't fun, slowly realizing that Clinton wouldn't catch up in Wisconsin, and has had lost the election.

The good news is that we won't have Clinton for president, with her defensiveness, 'safe' rather than bold leadership, and playing for popularity. We also will have so much less sniping at her. I feel a lot of relief about that.

The bad news is that we'll have a lot of unknowns with Trump and whatever gaggle of advisers he'll have.

But I'm not a pessimist because the world has generally turned out better than the worst case scenario, often much better. The US and I have survived so many presidents who were supposed to ruin the country that I just can't muster worry because Trump is expected (by some) to be a hundred times worse.

I'll keep my eyes open for signs of authoritarianism, and fight it strenuously if it happens. But I'm not losing sleep over the possibility until I see actual signs.

Changes I do expect:


Oh, and if there's a registry for Muslims, I guess I'll be one of many in line, from the sounds of it. Not expecting that though. 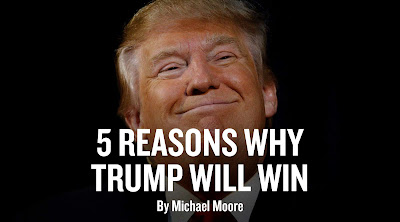 Extras. Reports of harassment in Day 1 of Trump's America. I haven't witnessed any, and I won't stand by if I do witness anything. Revisit Michael Moore's prediction.
Posted by ModeratePoli at 8:29 PM

By the time authoritarianism happens, it will be too late for any opposition. That's because it has already happened and they have been counting on it to consolidate power with no institutional checks remaining to keep them from doing so. The refusal to address President Obama's nomination for the Supreme Court is an authoritarian move. The Constitution went out the window with how the Pugs got control of practically the entire government with what they see -- rightly or wrongly -- as a blank check for anything they may push.

The ONLY thing standing between a Republican utopia and a pluralistic society is Chief Justice John Roberts. And if one of the liberal justices or even Anthony Kennedy dies in the next two years or before the people wake up and attempt to toss them from power. I doubt they will allow that to happen again, as it did in 2006 and 2008. Expect a scorched-Earth approach, with voting restrictions galore and a propaganda machine unlike the world has ever seen.

Donald Trump won the presidency without even a plurality of the vote nationwide -- not even close -- and only 46% of the vote AT BEST. He achieved that with promises of punishing those voters enemies, with a wink a nod to race-baiting, shared grievances, and frustration with the majority that realized that many of them had been voting against their own interests for decades. And Trump didn't just run a evil-based campaign. He has been that way for his entire adult life. People who could ignore all of that and vote for him, for whatever reason including ginned-up hatred or distrust of Hillary Clinton, will deserve the pasting they will get when they have to answer for it to a higher power.

Perhaps the world will "survive" as you might describe it. But history tells us it won't be the same and our American civilization is now toast. No institution (save consumerism) can prevent Trumpism from saturating the pores of our country. The damage to its soul is irreversible. We have made possibly the most evil and corrupt man in America the president and most powerful person in the world. The Devil himself could not have arranged it any better for chaos and catastrophe.

While my election prediction -- based on polling that may very well have missed the mark -- was wrong, I predict a 98% chance that Trump will do something so abjectly evil such as carpet bombing a city, and that his propaganda arm will spin it as "necessary" and that will result in a collective shrug.

Marshall in the Middle said...

Enjoyed the post MP, but your brother reminds me of my brother "the sky is falling" mentality., with all due respect to his well written comment above. Authoritarianism can also come from subtle sources such as a media that feels entitled to "select" the candidate they prefer with a complete and total lack of self restraint regarding their opinion. That is the creeping authoritarianism many Republicans have been enduring for quite a while. What was once a veiled preference for leftist ideas and ideals has morphed into intentional deceit, and creepy clandestine relations with the Democrats.

@chuck, thanks so much for your comment. One thing stood out--how many people chafe at the authoritarianism of the media. You could also add academia too. I probably haven't considered enough how angry it makes people. I'm used to it, and have been wise and careful about media bias for over 30 years. But that's me. Other people are so likely to have the reaction you describe.

I'd like to see part of the media break with these trends and clearly become fair arbiters. I'm not seeing the signs of that at all yet, except perhaps Bezos buying WaPo. Maybe other rich benefactors will do something similar, and set up even-handed reporting. Maybe WaPo will become more even-handed and be an example. I'm hoping for something like this to reverse the trend of the US splitting into two enemy camps.