I'm happy to shed light on local issues that may have national interest, like Romneycare, but I wish our Senate race wasn't one of them. Besides, being local doesn't make this issue look much different, except compared to a locality, say Texas, where an old-line liberal like Elizabeth Warren would never have a chance at a Senate seat.

The story swirling around her, that she parlayed a family story that she's 1/32 Cherokee into a professorship at Harvard Law, reeks of liberal privilege and hypocrisy to those that have a sensitive nose for that kind of stuff. I'm a little more understanding because my family has its stories too--that the unusual shape of my eyes (and my son's eyes) came from a Cossack raping a woman ancestor, probably in Ukraine. Lovely story, isn't it? So I'm attuned to family lore as lore, not as a lie used for advancement.


Story or Non-Story?
However, to others it stinks of the special favors that the liberal diversity police hand out to minorities and those white liberals who'll talk the diversity jive and even lie to claim some of the spoils for themselves. So if you're a libertarian or conservative partisan, you may love this story.

Me, I hate this story. It's a reminder of a dirty little secret in academia (which is my background), that it's hard to tell which professors are great because there's too much hype about too many of them; most of it undeserved; and all of it deeply envied by professors not benefiting from false hype. I grew up in this hot house world, and happily escaped it for industry at the first possible moment. So this has been a regrettable reminder of that world. (To be fair, it's often hard to tell which executives are good, and which only middling, which employee should get the promotion, which candidate should get the nomination, etc. So this problem isn't just a problem in academia.)


Those Little Lies
This story is also a reminder of how stupid little lies can cost you. Warren should have said that Harvard was (or might be) calling her a Native American right after she talked nationally about having a little Cherokee blood. Instead, she let the doubts surface and grow, whatever those doubts are.

So what are those doubts? That Elizabeth Warren isn't qualified for her position? She has quite a resume, especially work on consumer credit and bankruptcy law. So she herself has provided the easiest ammunition to use against her, distracting from her qualifications.

It reminds me how Bill Clinton gave the Republicans their best ammunition when he got that blow job from Monica Lewinsky. No blow job, no year long distraction, no impeachment. Ms. Warren, please come clean faster, don't fight it, and don't hand anymore noisy stories to the GOP. Hopefully you and Scott Brown can get back to the issues, please! 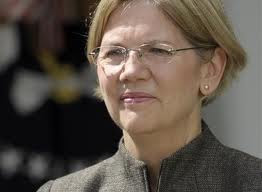 What's really behind this plain face?
Photo: salon.com
Posted by ModeratePoli at 12:44 PM

I've been surprised by the number of progressives who believe that one can be a minority based only on "family lore."

On the one hand, this disgusts me -- on the other hand, it may be a sign that we really are getting closer to the point where race doesn't matter.

@Couves, since you've volunteered that it "disgusts" you, can you tell me why? This is for my edification, if you don't mind.

It disgusts me because actual minorities are frequently subjected to prejudice and historical, inter-generational mistreatment that often still lives with them today in various ways. If nearly everyone can find some plausible claim to minority status based on family history, then we really lose sight of these legitimate social problems in our society.

I thought that's what progressives believe. Heck, I believe it, and I'm hardly a progressive. Either they're evolving beyond their core beliefs or progressives will conveniently shed their principles when it threatens their hold on power.

Universities (and some other employers) are required to present statistics on the number of "minority" employees, students, etc., and more is better. Thus the excessive focus on genetic background, because that it how the counts are done--easy to check off and unambiguous. However, genetic background does not necessarily correspond with socio-economic consequences of historic discrimination. So persons who come from wealth and privilege can count as "minority," and universities (like other employers) like them because culturally they fit in. At the same time, persons who have suffered from socio-economic prejudice, such as rural whites or Muslims of Middle Eastern heritage, don't count as "minority" even though they find it difficult to compete with the children of the white,Christian middle class suburbs. The categories are too crude, and they have been reified by generations of government policy.

@Anon and Couves, it seems like any system where there are advantages (all of them except perfect randomness), some people will try to game the system to collect the advantage. I don't know if it's mathematically impossible to prevent this, but it sure seems to be a historical truth that it's impossible.

What to do in light of this? I can't say now because I'm too depressed about the situation.

It's discouraging to know that we still aren't beyond the nitpicking. We are still shining a light into every slightly dusty corner of someone's life and discarding everything they stand for based on some incredibly small or superfluous claim or action.
We are all waiting for that superhero, that paragon of virtue who will save the human race from a) extinction, b) corporatocracy c) liberal extremism, d) atheism/secular humanism, e) climate change/global warming, and f) the other side. Mark any or all of the above.
We find whatever little distracting comment or aside, we spin it and then we spit it back out blown out of proportion and completely unrecognizable on the other end.
This is brilliant sleight of hand on the part of the politicians who have nothing to offer and present the other side as damaged goods in order to make their own lack of humanity seem valid.

It's years later, and Warren is looking better to me, perhaps in contrast to so many other politicians who lack the chops to consider real policy. She's much sharper than so many who are running.