Bernstein wrote a post on Obama's announced support of same-sex marriage and the effect it had on black opinion. In the post, he talks about how people usually support the position they think reflects the team's position:


So it’s not exactly that Obama influenced black opinions, would be my guess. It’s that African American voters who really don’t care very much one way or another about the marriage issue — but do consider themselves on Team Democrat — are now aware that marriage equality is the normal position of that team.

So, I had to wonder--how much of campaigning and connecting with voters is about sending signals about  team affiliation?  I think it's a lot. Just think of all the GOP candidates pledging not to raise any taxes. Or the Dem base in fits of joy when Obama says that the problem is not Medicare and Medicaid and the Ryan budget plan is "unserious."

It explains why so many Republicans say that Obama is a Muslim--it sends the anti-Obama signal. It explains why our blog pages are filled with repeats of the same talking points--commenters use them to identify as Team Democrat or Team Conservative or Team Libertarian. It also explains why I gets blasted so much--if I'm not sending out the right team signals, I must be from Team Enemy.

Maybe someday there will be a team that's a good enough fit for me, and I'll join that team. Then what I say will be identifiably That Team. But when I differ with that team, I'll probably have the same problem as now. However it might be just 10% of the time, not 95% of the time. Or maybe I'd still be identifiable, the way we can identify "gay conservative" or "liberal Catholic" now.

But that is a digression. The real question is how to move past projecting the team's signals to actually discussing issues and influencing people's political decisions. I don't know HOW to do this. Any ideas? 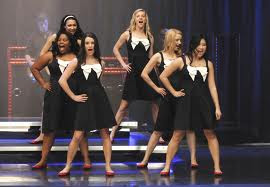 Team Glee--A Dem franchise from the looks of it
Photo: dailytrojan.com

Extra: Is being a loyal team member the same as tribalism?

Posted by ModeratePoli at 10:22 PM

Well, MP, you've hit nail this on the head, particularly about having a team.

The sports cliche is "There's no 'I' in team," and sports and politics are practiced and covered very much like sports. So your individualistic tendencies and opinions will tend to separate you from the team dynamic. If anything, team identification and discipline has grown in recent years. Fraternizing with or even recognizing the other team's positive efforts is disallowed if you want a spot on your team.

As of today, there are only two teams in every contest. I think it would be great if there were more options and the teams recognized individual opinions. The Democrats' team is somewhat more forgiving than the GOP, to their detriment during a time when team discipline is critical -- like when it comes time to play team defense.