Puzzled by this campaign

As I've said before, I don't think Obama deserves as much blame as is heaped on him. The House Democrats were worse, particularly Nancy Pelosi. However, they don't make such good targets because they were already shredded by their 2010 losses. Still, Nancy Pelosi holds onto her leadership position, in a demonstration of her lack of accountability to the electorate. Or maybe it's the duty of the House Dems to throw her out, so it's the House Dems who aren't being accountable to the country.

The GOP is better doing attacks than simply presenting their case because their positions are questionable and tenuous. They don't have a strong story on the budget and the deficit. They have more tax cut pixie dust on the economy, because it WORKED SO WELL LAST TIME.

So their strategy has to be to attack, and hope that their attacks hit the target with Americans, and that something sticks to Obama.

I guess I understood this campaign after all. The reason it doesn't feel cogent is because it's not cogent. 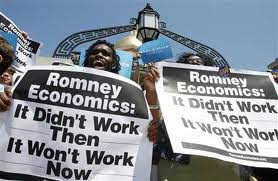