"The worst danger facing the US:" A retrospective

Back in the early 1980's, when Reagan was president and the USSR was a communist state instead of a lot of kleptocracies, I read an article about the biggest issue facing the US. At the time, the most devastating concern I had was nuclear war. Do you remember that fear? Intercontinental missiles launched out of silos and nuclear submarines targeting military and population centers in the US and USSR. The explosions would kill millions instantly, and kill most of the rest slowly as society fell apart and we succumbed to disease and starvation. That was a standard fear in my generation, and the film Testament was our closest image of it.
But nuclear war wasn't the subject of this article because the writer didn't have the same fears I did. Instead, she wrote about her fear of the mounting federal debt. I remember scoffing at this. How could anyone worry about the deficit when our society (and more personally my entire family) could be annihilated in a nuclear war?

Now I don't worry about nuclear war anymore. A stray nuke, yes, but we'd get over that isolated disaster the way we got over 9/11.

However, I remembered that prediction in the article. At the time, I noted that the author was a born-again Christian and an avid supporter of Reagan, so I probably dismissed the rest of her ideas. I certainly don't remember anything else--whether she made particular suggestions on how to cut the deficit or spending, or the future effect the deficit would have.

Actually, I didn't dismiss everything because I took the time to note the different way of looking at the world. I decided to remember and check back in a few years. Was she right that deficits were the biggest danger, or was I right that it was nuclear war?

I can't answer that question even today. Back in 1981, nuclear war might really have been the biggest concern. If we hadn't treated it seriously, we might have made serious mistakes in our policies that would have resulted in nuclear disaster. Maybe our fear and concern led to negotiations that were tremendously successful at limiting the danger.

However,we didn't focus on that other danger: the deficits. So they just grew larger and larger as we half-watched. Now, they are a tremendous danger.

Well, maybe so, maybe not. Deficits will never be the same kind of existential danger that nuclear war was. Ironic if the worse danger is easier to solve than the lesser danger. But it will probably be that way. Sigh. 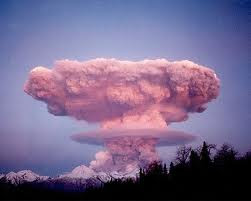 Posted by ModeratePoli at 11:57 PM

Email ThisBlogThis!Share to TwitterShare to FacebookShare to Pinterest
Labels: danger to the US, deficit reduction, nuclear war