I recall hearing by the British phrase "the loyal opposition." Being without a pinch of Anglophilia, I never found out what it meant, but I assumed it was a British ironic joke, like the parts of Monty Python I didn't comprehend either.

Here in the US, we don't have a "loyal opposition." We have our two-party system, in which the parties vie by any means to win elections. We have our history of election fraud, our gerrymandering of districts to help our side and stick to the other side, Nixon's dirty tricks, poll taxes, stealing debate prep books, etc. All's fair in an election except beating people up at the voting stations. So we might be nasty, but we're not violent.

The election season has somewhat looser rules. After election, it's back to civilized behavior, and maybe division of the spoils. In the past there was more bipartisanship in Washington, maybe because policy outlook was more regional than party-based. The northeastern Democrats had more in common with the northeastern Republicans than with southern Democrats.

For the past 3 years, that bipartisanship has completely broken down. Now, the party that happens to be the majority now isn't working with their compatriots who are likely to be majority sometime in the future. Instead, we have bitter combatants who haven't laid down any weapons or accepted the outcome of the last election or the election before that.

It's always been true that the last election never settled questions for good, no matter how much the last winners wished for it. But the lack of truces now makes me wonder if all major legislation is doomed for the foreseeable future. It's hard to imagine this Congress agreeing on changes to the tax code, even though everyone's tax rate is set to increase significantly at the end of 2012. Not even this impetus is enough to get these bloody-minded opponents to negotiate.


We need to go back to the days when the election-season fighting ended with the election.

By the way, once I thought about it, I realized what "loyal opposition" means. It means that the party which lost the election isn't going to make war on the winners. They will be loyal to the elected government, and not take up arms, split the country, and start a civil war. As angry as people may get in Parliament, I think they consider how great a tragedy would occur without the loyalty of the losers. We need to take a lesson. 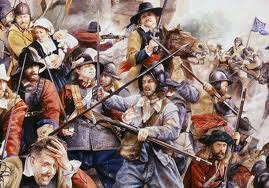 
Link: My guess about the origins of our current amped-up partisanship.
Posted by ModeratePoli at 7:51 PM

Email ThisBlogThis!Share to TwitterShare to FacebookShare to Pinterest
Labels: partisanship

I’ve always assumed “loyal opposition” meant the opposing party disagrees but remains loyal to the country. So, ideas that they think are genuinely bad, they oppose, but they don’t oppose things that would be good for the nation for purely partisan reasons.

Another key difference is Britain’s parliamentary system. The majority party always has the House of Commons and the Prime Minister’s office. They can enact legislation even when the minority disagrees.

In the US, divided government is very common and bipartisanship is required to do much of anything. This makes it’s disappearance - even around topics on which the parties agree - more troubling.

@swain, Since you're probably not British either, maybe we need to look up the meaning of "loyal opposition" so we're not guessing based on ... um... British reruns?

Wikipedia says "non-governing parties may oppose the actions of the sitting cabinet ... while maintaining loyalty to the source of the government's power. The concept thus permits the dissent necessary for a functioning democracy, as the policies... can be challenged without fear of being accused of treason against the state." [Ha ha, their grammatical error, not mine for a change.]

Merriam Webster has a definition pretty close to yours, but they disallow cut-and-paste.

Maybe I wrote this post just because I'm tired of Republicans calling Democrats traitors. Give the Democrats some credit. Notice that they're loyal, rather than trying to start a civil war. I guess I used a lot of words to try to make that simple point. Good thing electrons are cheap.