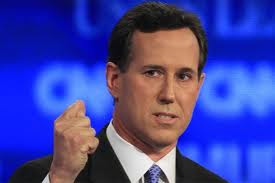 Family members who see this title aren't going to believe it. I've been a vocal opponent of Santorum because of his culture warrior stances against working women, non-nuclear families, gays, reproductive choice, and even the choice to have a small number of children or no children in your marriage.

I've seen in the debates that Santorum has learned to cool it with this kind of talk. Now, he'll love his son even if he's gay, he declares. I don't see sincerity in these statements because he's never come close to disavowing the intrusive policies he advocated as a senator.

So I'm flabbergasted to find myself liking some of Santorum's message. He wants to be a candidate for hard-working blue collar families "left behind by both parties." He says that the Dems just want to take care of them, which isn't what they want. They want opportunities to get good, respected work after completing a solid high school education.

Now, it's not as though Santorum has a realistic plan to make this happen against the tide of economic forces. But it's a contrast to the general Republican focus this past fall on mythical "job creators" whose taxes MUST NOT BE RAISED. It's also a contrast with Gingrich's message, also just after the South Carolina primary, where he spends most of the time bashing elites in this country and the "radicalism" of Obama.

Congratulations, Newt and Rick. Rick climbed up from lowest place in my estimation, and Newt rocketed himself down there. Is this what counts as progress in the GOP? Sigh.

Same day update: Santorum lets a questioner bash Obama as a Kenyan illegitimate tyrant, and then bravely ... agrees with her, in part. He never corrects her. He looks uncomfortable with his sin of omission, skipping a beat or two before he describes how Obama completely ignores the Constitution. Oh, the stream of lies from politicians' mouths!

Update 3/19/12. Santorum with equal cowardice stood by as a preacher told all non-Christians to leave the country. But he didn't clap, or presumably inhale either. Good job, Rick.
Posted by ModeratePoli at 7:38 PM

You know, there's a reason we ran Santorum out of Pennsylvania on a rail in 2006. It wasn't simply a "wave" election as he's tried to explain. He simply doesn't represent the opinions or positions of the people of the state, and cared little whether he did so or not. He has his issues and uses the platform he had (and wants now) to push his own agenda whether people want it and agree with it or not.

Is he "likeable"? He's probably an upstanding guy in the same way that Ned Flanders is. I don't know him personally. His self-righteousness judgmentalism does not wear well, however, and he's more than happy to engage in all in the sin of pride while pointing out everybody else's sins as being worse.

I wouldn't say he's a hypocrite, which is so common in the GOP these days -- and unashamably so -- that Santorum relative lack of it stands out as a positive. So much more to pity in that lot. He probably does care about the poor working class masses who were abandoned via the policies he wholeheartedly endorsed while he was supposed to represent their interests.

Perhaps they can be soothed by Santorum standing up strongly for their right to pray in school (which any student could always do at any time) and let people continue to own guns which the government was never going to take away -- but these were convenient straw men while greedy people outsourced their jobs to Asia and Africa at a fraction of the wages of his constituents, and took tax breaks he and the GOP offered up to do it.

Sure, Santorum NOW wants manufacturing jobs for the poor slobs who don't follow the liberal elites into better paying careers in health services, marketing, etc., which requires investments in education beyond beefing guys up to play for the high school football team. Just at a fraction of the former pay rate and without union protection from an insecure livelihood and without OSHA regulations.

So do the Dems just want to give them a handout? I'd say it's just another straw man. Dems have pushed education, job training, and investments in new, cleaner and forward thinking industries such as renewable energy. He can't attack that, so I don't find his argument or demeanor particularly persuasive. Until he answers for his role in creating the conditions of the people whose political support he wants now, he attack and judge the person he sees in the mirror.

@Anon, I intentionally wrote a provocative headline. Of course there's plenty to dislike in Santorum. I don't forgive him any of his many mistaken political stands, either now or in the past, since he hasn't ever acknowledged their wrongness.

But, surprisingly, I found one corner of his candidacy to like, so I decided to write a minor post on it. It's no more than that. I wish it could be...