I wrote more posts in November than in any other month in the past year. The collection of links aside from the Ukraine scandal are paltry. Not much new in America.

Surprising Arizona politics. A tough, nasty, bigoted sheriff prompted many Latinos to run for elected office. This is another sign of the self-correction in the American political system. (But is it enough?)

Illegal gun sales. By law enforcement officials. Did they trust that the guns wouldn't be used on fellow police?

The GOP southern strategy. An article from back in 1970. It's the typical NYT style with a lot of side trips, but very interesting, focusing on the strategist who foresaw the realignment of voters.

How Kamala Harris failed. She lacked a clear strategy beyond being intelligent, black, and female.

Centrism is deluded. This article makes a strong case that there's no chance of working with Republicans. However, that's not the only reason to support someone like Biden or Buttigieg. Another reason is that those further left may not be able to win, not worth taking the chance, or just too socialist.

Flynn facing sentence. Mike Flynn tried to delay his sentence by promising he'd cooperate more with the Russian investigation. Then he fired his lawyers, brought in a new team to push the deep-state conspiracy narrative, and attacked the people he's supposed to cooperate with. The judge is not amused. A shorter version of the newstory and a longer version.

Media bias measured. Well, I'm not sure how the determination is made, but this site lists how biased a media outlet is, and how factual the reporting is. Plus it gives examples when there are issues with factual reporting.

Trump talking points. Someone allied with Trump launched a special site just for those holidays spent with your stupid liberal family members. It tells zipperheads how to argue, just in case they haven't watched enough Hannity lately. Are these good arguments? OF COURSE NOT. When do Trump supporters care about the quality of their arguments? Blather and blind, willful assertion are fine by them. 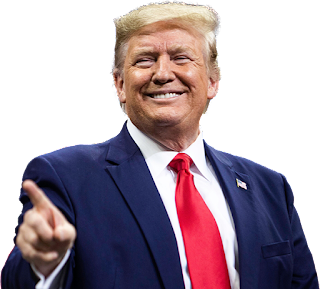 Posted by ModeratePoli at 3:30 PM No comments:

Inspector General Report on the FBI

This long-awaited report was supposed to reveal the cesspit in the FBI--all those conspiratorial corrupt agents trying to prevent Trump from competing in the election or taking the power he rightfully won.

The report didn't do that. A few weeks before its release (when the final changes are being made to the umpteenth draft), Trump predicted that it would be perhaps the biggest scandal ever, reaching all the way to Obama. Beyond that, Trump is strangely vague about the contents. Trump was either misinformed or deluded. The complaints in the report encompass several teams of agents but are clustered around just a few elements of the process, primarily the FISA warrant.

It's interesting to recall what the wingnuts predicted. Trump's phones were tapped (by Obama!). His campaign was spied on. The meeting between Mifsud and Papadopoulos was an FBI or CIA trap. The Trump Tower meeting was an FBI trap. The supposed report by the Australian diplomat was a fake. The FBI was working solely with the DNC and Hillary campaign, and the rest is lies to cover up how putrid and biased the FBI had become--no professionalism, raw partisanship. (I've written recently about one such conspiracy post.)

Well, the IG report is available with minimal redactions, and it does very little to support that wingnuttery. I've read various parts of it. It concludes that the FBI had reasonable grounds to open the investigation. It seems like the IG found the stuff about the Australian diplomat plausible, and not a phony cover story. A very common phrase from the report was:


... we did not find documentary or testimonial evidence that political bias or improper motivation influenced his decision.

This wording was used in regard to the opening of the counterintelligence investigation, the use of 'confidential human sources' (informants sent to collect information), or in seeking the FISA warrant to surveil Carter Page. So those texts between Strzok and Lisa Page that the conservative media pretended were so ominous--the IG didn't find that they had any operational effect. No surprise there. They always seemed to be casual texts, not messages between conspirators setting operations into motion.

The biggest issues concerned the FISA warrant, the use of information from Steele, and the handling of that information and exculpatory information. The IG report had a lot of complaints about that area. However, that is really very limited.

Just consider what wasn't in the IG report:

How do I know this isn't in the report? Because I read through the rather boring Table of Contents (pages xx-xxviii). It's a relatively painless overview of the decidely non-juicy details.(CHAPTER FOUR: THE FBI'S RECEIPT AND EVALUATION OF INFORMATION FROM CHRISTOPHER STEELE PRIOR TO THE FIRST FISA APPLICATION... CHAPTER EIGHT: MISSTATEMENTS, OMISSIONS AND ERRORS IN THE FISA RENEWAL APPLICATIONS.) Conclusions start on page 410. That's how I found out who got their hands slapped the hardest.

From the IG report, you don't get a sense that the FBI was a den of anti-Trump activist spies. Instead they are rather methodical drudges, but they still didn't manage to follow all the very important rules, and therefore everyone involved should have their performance reviewed. This applies especially to Bruce Ohr of the DOJ. Uhhhh, that's it. Performance reviews. That's kind of anti-climactic.

The most common complaints, besides that information wasn't included in the FISA application or renewals as it should have been:

While we did not find documentary or testimonial evidence of intentional misconduct on the part of the case agents ... we also did not receive satisfactory explanations for the errors or problems we identified.

Yep, those agents didn't explain why they didn't do things the right way. So maybe they were conspiring with... someone, but they were wily enough to get away with it.

Were there any bombshells from the IG report? None at all, unless you were counting on some juicy conspiracy revelations. Too bad for those who were, such as Attorney General and all-around toady Bill Barr. I'd say better luck next time (the Durham investigation), but I wouldn't mean it. 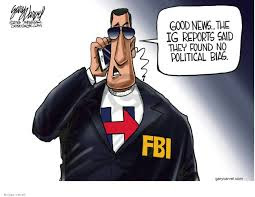 Some will interpret it this way.
Image: cartoonistgroup.com

Update 4/1/20. As I suspected, the kinds of mistakes/shortcuts taken in the Carter Page FISA application weren't unique, but were rather common practice for FISA applications, which the Inspector General found as a follow-up to some of his other investigations. All those tut-tutting the Page application didn't know what the actual practice is, and, horrors, some rules are kind of winked at. Ummm, I've done this myself on some of the damn paperwork on some of my jobs, so that was always my top suspicion.

Update 4/10/20. Another disclosure on a Friday afternoon. Some footnotes in the Page FISA warrant were declassified. GOPers claim that they show the FBI knew the Steele document was rubbish. The footnotes actually show that the FBI was aware that the Steele document was likely to be partly Russian disinformation. GOPers maximize the disclosures beyond what they say. Fox News goes for broke. Hmmmm, though, on a Friday afternoon. Is this a burial or not?
Posted by ModeratePoli at 8:11 PM No comments:

Impeachment hearings are moving along, but that doesn't interest me too much. The process is going to be something, and it probably won't be outrageous though the Republicans will claim it is.

Here are some interesting developments:

Follow the phone calls. Who was Giuliani calling and what were the conversations? The intelligence committee subpoenaed records and got the info. This would be an interesting avenue if Giuliani could be induced to answer honestly. But that is so unlikely.

Withholding foreign aid. Trump has done this before, with big announcements about how countries to our south aren't complying with our reasonable requests. This article is a reminder of how foreign aid is handled in legitimate ways. It looks decidedly different from what happened with Ukrainian aid. Damn, I wish the Republicans would stop covering up for Trump and acknowledge that evidence right in front of them.

Dog and pony show. Hilarious attempt by Giuliani to shift the narrative to Biden. Yeah, right. Only propaganda outlets will show his version. News has erupted all over the Ukraine situation, and Giuliani's version is clearly not real news. 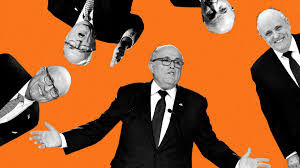 Posted by ModeratePoli at 3:02 AM 2 comments: