I had a chuckle (not LOL, but a bit of amusement) over this comment on the proposed Keystone XL pipeline:


"The president of the United States should have said, 'Yes, TransCanada is willing to start at the northern border and southern border of the U.S., go three states on both sides of (Nebraska) before they get to us, and we will be ready by the time they get here.'" --Nebraska Governor Dave Heineman (R)

So this governor thinks a huge construction project should start before they know where the mid-section will go.  I guess he's not an engineer or a finance guy.

But he's trying really hard to be a good Republican. 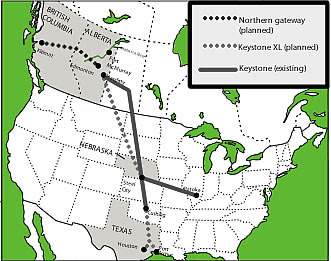 Extra: This looked like a detailed article, though definitely from an anti-pipeline viewpoint. Also, I like what this commenter wrote:

"I have no problem with a “go slow” approach on a multi-billion dollar project with almost infinite variables. Let’s do it right the first time, even if that means making sure we’ve got the whole process defined before we begin."

Posted by ModeratePoli at 9:04 PM

Here is an article outlining why Canada should reconsider its position on exporting oil sands synthetic crude:

Canada's domestic supply of conventional crude has been on the decline since the early 1970s and despite the country's exports of synthetic crude, imports of nearly 800,000 BOPD are required to meet growing consumption.