More reflections on the Iran deal

No one wants to admit how tough making this deal was. There's Iran, who is a very tough negotiator. There's a rickety alliance that backed the sanctions. There's the president and Secretary of State Kerry saying it's a good deal, it's the best we could get outside of fantasy land, and look at all these promising aspects. There's the noisy opponents of the deal pretending that we should have walked away and screwed Iran down even more. There are Iranian leaders who point out all the nuclear work they'll still get to do, but don't explain why such a defiant nation went into negotiations.

Who out there is saying that this deal probably has more holes than swiss cheese, but it's still the best we could get?

But think about it some more. This isn't just the best deal we could get, it's also historic. By my reckoning, it's the first deal limiting a nuclear program that has a chance of working.

Our deals with North Korea were failure after failure. Now they have nuclear weapons but are still one of the most benighted countries on Earth. Israel stopped Syria and Iraq from trying to build nuclear weapons by bombing them, not negotiations. With Iraq, it was a temporary setback. Their continued ambitions led to the American-Iraq war and the devastation of their country. Qaddafi in Libya gave up his nuclear program freely and willingly, perhaps sensing his own end, which nuclear weapons wouldn't have prevented.

If Iran actually abides by the agreement, it may be the first successful hard negotiation to prevent a country from going nuclear. That will be a surprising success in a field where failure is the norm. 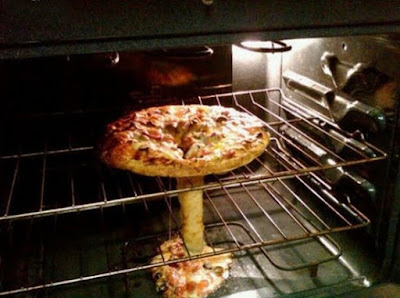 A-bomb in the oven?
Image: outsidetheinterzone.blogspot.com


Extras. One article correctly highlighting how historic this deal is, but perhaps the article is thin on how weak it is. A good look at the problems in the deal, but also the huge obstacles in getting to a deal, including this: "The day [Obama] walked in . . . Iran was already a nuclear threshold state."
Posted by ModeratePoli at 9:20 PM

Any agreement -- from international treaties to giving your child an allowance for making their bed every day -- is only as good as the parties to it. That's a disturbing notion for many people, who assume as most parents would that their kid will break the deal but demand the money anyway.

But any negotiated deal is subject to BATNA -- Best Alternative To Negotiated Agreement -- of the parties. In this case, both sides' BATNA sucked, so we probably got a deal they could live with. If I understand the structure of the deal, Iran would find it hard to cheat (we are talking about atomic material, which is hard to hide with our sensing technology today), cheating would be met with harsh sanctions and, they will forever be under watch.

To that end, Israel's belligerence is actually a help, as their best BATNA is exactly equal to what they've said all along. Most Israeli's kind of get this, which is why everyone over there hates the deal, but without a deal their BATNA goes haywire. With this deal, Israel's enemies are divided and not in an arms race against each other, which might ultimately turn against them.

So notice they never offer an alternative. Obviously, it's a war they can't win that bring them a world of hurt.

@dangerous, It wouldn't surprise me if Israeli are better at reading the situation and manipulating Americans than Americans are. They've had to be more savvy to survive as a small country in a hostile region.

And you are absolutely right--they don't offer an alternative. How often have they? Of course, it could easily be that any plans they offer are immediately considered shit by their adversaries, so it never behooves them to offer anything. So, it's not totally their fault.

Right. You can't blame a duck for kvetching.