Conservative Christian values have been losing ground for my entire lifetime, so I'm probably not the best person to write about it. I don't know what's good about this set of values--I only know what's passable and what's hypocritical.

Did the conservative Christians admit they were wrong? No. For many, their belief in the inerrancy of the bible or of their catechism doesn't allow them to admit the scientific evidence, so they are completely stuck. Their rules have been shown to be incorrect, but they can't do anything about it. They can't amend the rules and they can't admit they're wrong. So maybe they're quiet about the case where good people don't follow the rules, and noisy about the next topic on the agenda.

What was next on the agenda? Maybe divorce, which they mischaracterized first as a moral failing and then as a whim. However, too many conservative Christians found themselves divorced at some point, so they let that slide too.

Being against homosexuality had and continues to have more staying power as an issue because it's less common than straight pre-marital sex or divorce. However, as more gay people come out to their religious parents or to neighbors or coworkers, the general public is finding it harder to see homosexuality as scary, evil deviance.

I remember Anita Bryant warning about the scourge of homosexual teachers in our schools. That worked for a while, until we found out that many sexual predators had a front as regular, married guys.

Ok, so maybe homosexuals weren't particularly predators, there was still the 'abomination' factor, where abomination is the biblical term for 'icky.' But restrictions based on ancient biblical rules don't fly when so much of society is modern and educated, not to mention the many who have tried sushi and realized that 'icky' doesn't always pan out. Just as sushi turns out not to be icky, other forms of sex often turn out not to be icky either.

So the biblical restrictions against pre-marital sex, divorce, and homosexuality fell apart in our modern era. Why do conservative Christians cling to their outdated viewpoint on homosexuality so much more tightly than they did to the biblical view of pre-marital sex or divorce? I really don't know why they keep fighting this one. Unfortunately, I don't currently have any close friends  who are religious and hold this view, so I have no one to ask this sincere question. I wonder whether it's the desperation from so many losses that makes them fight this one with all the energy they have left. 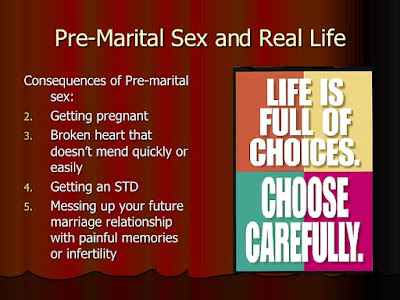 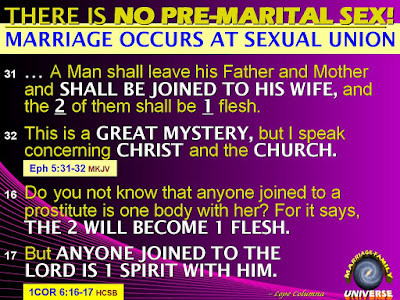 What a relief!
Image: bibleexplainer.blogspot.com

Extras. Conservatives complaining the liberals were just pretending to care about marriage, but really they don't. Of course, in this view, all liberals are a single massive blob of wrongheadedness, not individuals, some of whom dislike marriage while others strongly support it. Me, I'm a big fan, in case you forgot.

Do you have to read the post after seeing this graphic? I did. 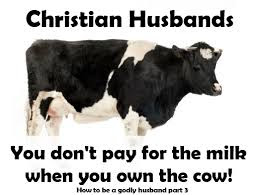 Image: biblicalgenderroles.com
Posted by ModeratePoli at 12:38 AM