First Things had a convenient round-up of reactions to the ruling.

As expected, we had the 'Oh-no-they-didn't' talk about five justices trampling the Constitution. They also trampled the truth about marriage and what's good for society. (Per Ryan Anderson--boy wonder proponent for traditional marriage, now raking in the money as one of the few millennials who's against marriage equality. Save your money, Ryan. That gravy train isn't going to last till retirement.)

The next writer complained that Anthony Kennedy thinks opponents of gay marriage are motivated by "irrational" animus. If 'irrational' includes religious dogma that you want exempted from rational, non-religious-based scrutiny, then I guess Kennedy is right. The objections to same-sex marriage don't seem to pass the test of secular rationality.

But quick, before someone notices, change the subject to ensuring that plural marriages can be prevented. But will that be effective if you use the same approaches that just failed to protect traditional marriage? Will a Defense of Monogamous Marriage Act work where DOMA failed? Hadley Arkes isn't asking these obvious questions. He's in 'Do something' mode.


"What has been most striking all along is not the division, the passion, at times the vitriol. What has been most remarkable is the insistence by same-sex marriage proponents that all dissent be silenced—whether through threats of economic destruction, legal bludgeoning, and now, increasingly by appeal to the raw power of the State. The firing of Brendan Eich was a bellwether for what has now become a commonplace: the fanatical insistence that all opposition be squelched, and more—that even belief in an alternative view of marriage be eradicated."

I'm not sure whether this is correct or not. Same-sex marriage has been a heated political issue largely because traditionalists didn't want to compromise. They have fought reasonable compromises, sponsoring referenda to undo compromise, and now they complain about how passionate it's become. Well, it didn't have to be this way. In fact, I don't know of anyone who's been outed in Massachusetts because they gave money years ago, or voted the wrong way. It was a quiet, fairly peaceful transition. But if you want to turn it into a drag-out fight, then there will be casualties. But you don't get to foist all the blame on the other side when you put on boxing gloves.


Pleasant surprises: A bit of empathy, a bit of realism

Not all the writers were hellfire over the ruling. A nice surprise came from Wesley Hill:


"In countless sermons, songs, Bible studies, and informal pew-side conversations, I heard that message like the peal of a gong: singleness equals alienation, marriage means home. (It’s no wonder, given this theology, that whole ministries sprung up to try to rescue gay people from promiscuity and point them toward “traditional” heterosexual marriage.)"

Unfortunately, Hill thinks the answer is celibacy and spiritual friendships and callings. But he gets part of reason why gays want to marry. Most of the authors don't give a hoot about the deep personal reasons for wanting a spouse.

The realism was from Peter Leithart:


"We should stop acting like an exiled Tsar, hoping for the coup to put us back in the Winter Palace... Culture war continues because, in response to our displacement, we’ve tried to politick our values back on top. We failed...  Attending to our own house is now our best strategy... It’s also the way of peace, perhaps the only way of peace remaining."

Yes, I hope there will be peace. I'm not counting on it, because the resistance to change, compromise, and other people's needs has inflamed a lot of passion and a lot of warriors. And warriors tend to keep on fighting. 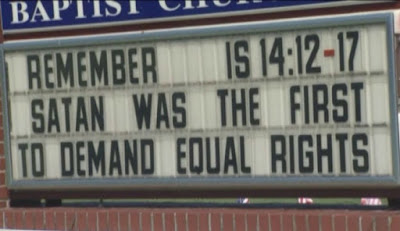 Rights for me, not for thee.
Image: inquisitr.com


Extras from the same round-up of opinions:

Posted by ModeratePoli at 7:46 PM

Right. Sore losers. They want to think they lost because of a bad call by the officials.

I'm surprised I haven't seen at least one opponent of same-sex marriage be sanguine about the fact that they never had any way to keep same-sex couples from saying they were married. The best they could do is keep their state for recognizing the marriage and refusing to issue a license. They used the law to make themselves feel better, whether that was justice or not.

So I have zero, ZERO sympathy toward their distress now and the public should stamp out their efforts to turn back the clock and shame them for ever using the law for such an unjust purpose.
Religious freedom is no excuse to impose your beliefs on others via the law.
Religious beliefs are not an excuse to discriminate against those who are exercising their lawful rights.
Religious beliefs are not an excuse to be hurtful to others who do not share those beliefs. Doing so is itself a sinful transgression far deeper than supposedly violating one's beliefs.

So I think even clerics should re-examine their faith's dogma on this subject and recognize the fundamental flaw in that dogma as it pertains to this issue. The Golden Rule carries a far stronger sense of morality than any religious dogma. While it's not right to FORCE anyone, even religious clerics, to perform same-sex marriage ceremonies or participate against their consciences, it's quite acceptable to encourage them or shame them or even sue them (at least in the commercial sphere) in order to get them to re-examine their beliefs in a clearer light. Those who are wise and just should realize that what they believed was not God's plan after all.

@dangerous, I completely agree that clerics should question their dogma, but for many that is totally against the way they think. Instead of trusting their own minds, questioning, and working through ideas, they are dependent on an authority that they absolutely trust. It's a whole different mindset--though I do see some who will question some things but not others. Those people should be worked on, since there may be a bit of hope.

You know what's really ironic about the predictions that polygamy is the "next step" after SSM? There are in fact people in the United States who have been vying for a right to polygamy for some time. They are known as "Mormon fundamentalists," and they are a splitoff from the main LDS Church. They believe polygamy is not only allowed but religiously sanctioned.

Therefore, if "religious freedom" is so important to SSM opponents, why aren't they backing polygamy rights? That's what I find ironic: it seems to me that their own arguments open the door to polygamy much more than SSM does.