The Iran deal--wishing it was better

The deal is not spectacular. Most countries were hoping that Iran would give up its nuclear enrichment capability. Instead, Iran held fast to its sovereign right, and didn't back down on some enrichment. They could have sent a reassuring message to the world, but that's not what they chose to do.

Instead, they played on weaknesses among the countries supporting the sanctions, and got themselves more leeway for producing nuclear fuel. Yes, there are inspections and limits that they've agree to. But they haven't renounced the capability, as most people hoped they would.

Still, this may be the best deal available to hem them in. The alliance for the sanctions was breaking down. Russia is definitely more belligerent than when they agreed to the sanctions. China rarely wants to forego trading partners, so they were probably not strongly dependable on sanctions.

So maybe this weak deal was the best we could do.

I'm not worried about Israeli reaction to the deal. They already have their nuclear weapons, but those weapons aren't particularly destabilizing. Israel has been suspected of having nukes since the 1960s, and that hasn't caused much of a blip in the Mideast compared to other aspects of Israeli policy.

Iran's nuclear capability causes more worry, partly because it might set off a nuclear arms race in the Mideast. I don't want to imagine what could happen if Saudi Arabia started building nukes. Imagine if ISIS or Boko Harum or a similar successor overran a base and got their hands on nukes. If Saudi Arabia builds nukes, the risk of this kind of scenario would be much higher than we've endured before. I'm not saying it's inevitable, but the risks are definitely there.

So Iran has increased the instability of the Mideast with its nuclear posturing. Sanctions didn't completely stop them, and neither will this deal. I'm not sure whether this deal will increase instability or decrease it. A lot depends on whether Iran misbehaves, and whether other countries will wait to see if Iran misbehaves.

Perhaps this is the best we can do. Iran doesn't want to give up its edge, and they have good reason not to. They have a lot of implacable enemies who wouldn't mind seeing them in ruins. Saudi Arabia would blow them off the planet if they could avoid the consequences of such an action. Lots of countries would blow their enemies to smithereens if they could get away with it. But consequences are unavoidable, and that keeps many people and countries in check.

Maybe the Saudis will realize that Iran assures its own destruction (by the US or others) if they ever use nuclear weapons, and therefore the Saudis won't start their own nuclear program. Maybe the Iranians will realize it too, and not proceed to building and testing a bomb.

I've really got to hope for that, since actually stopping them would take entail a huge war--bigger than anything since WWII. No country has the stomach for that. 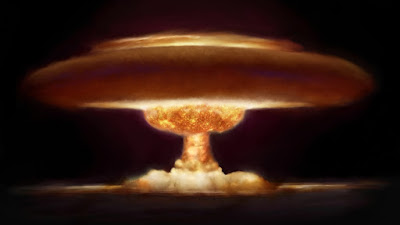 Extras. I have a strange argument with a hawk who focuses, oddly, on UN issues. His thesis is that Russia and China would be too embarrassed to break a standing sanctions regime. Color me dubious about this claim.

Interesting article that delves into this question: "Is Iran an irrational rogue state or a rational, cooperating party?" Much of the success of the sanctions were due to US financial centrality, and the US could still exercise that power if Iran backslides. Read the funny/devastating tweets in this article.
Posted by ModeratePoli at 12:58 AM