Analysis of the Cincinnati shooting video

Earlier this month, a security officer for the University of Cincinnati shot and killed an unarmed driver during a traffic stop. The officer was indicted for murder, and also indicted on the lesser charge of manslaughter.

He was wearing a body camera throughout the incident, and the video was just released. Now, accordingly to the prosecutor, the video shows "the most asinine act by a police officer I have ever seen."

That's not what I saw when I closely watched the video, though admittedly I wasn't able to watch it frame by frame.

The officer pulled over the driver for a minor infraction--not having a front license plate... or did he pull him over for driving while black? The officer asks for his license. The driver searches around for it, but doesn't produce it. That is an expedient move by the driver because his license had been suspended (as investigation showed after the fact). If he had produced his license, the officer would quickly confirm that he was driving with a suspended license. That would probably mean an arrest, towing the car, and lots of fines for the driver.

Here is a chronology of how the altercation unfolds:
Clearly, the driver was fleeing the traffic stop. Clearly, the officer reached for his weapon and shot within 3 seconds of the driver starting the ignition. Both men were acting and reacting very quickly. As the prosecutor said:


"You won't believe how quickly he pulls his gun and shoots him in the head."

The officer claimed he was dragged, and that doesn't seem to be true. However, the driver must have put the car in gear while the officer was reaching in, so the officer had good reason to worry that he might be dragged or knocked down and run over.

To understand and judge the criminal charges, we will have to consider how officers should act when a driver tries to flee a minor traffic stop. We have to consider whether the officer was in danger, or whether he was trigger happy, or both. This is not an open-and-shut case.

It does seem to me that many officials in Cincinnati have ganged up on the officer. It's not just the prosecutor, who laid on charges of intentional murder and incompetence, The university fired him. The mayor stated that he wanted charges. No one there wants Ferguson-type riots and demonstrations. The officer seems to have been thrown under the bus as Cincinnati tries not to be the next epicenter of race-based demonstrations.

This isn't my final word on this case. I might write a post on how the video refutes the claims that the prosecutor made in his (grandstanding) press conference. Maybe I'll learn more about police training that leads officers to shoot first and shoot fast. Maybe I'll unravel how a simple traffic stop ends up with someone dead, not just once, but too many times already this year. 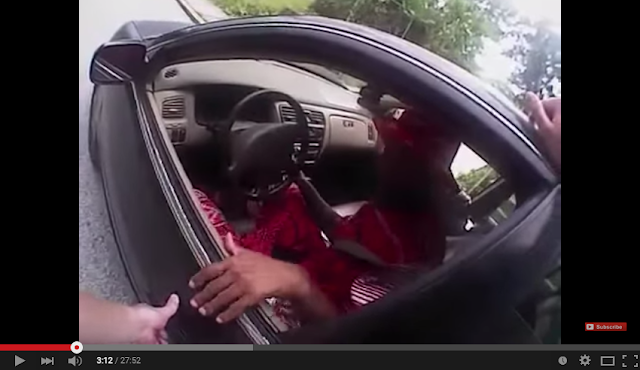 Extras. USA Today's list of events at the end of this article differs from mine. They're wrong and they seem biased against the officer: "Without a word, Tensing fires a single shot," "the car rolls a short distance." The car didn't roll a few feet, but probably at least 150 feet. You can hear the rev of the engine as though it was accelerating, not 'rolling.'

More of the chronology:
Were these other two officers already at the other end of the block? What did they see? Did they have body cameras too? Maybe their footage isn't important since we have video of the entire event at close range. Or maybe it is important if it is shows more of what happened.

Update 7/31/15. Video from the body cameras of the two officers who arrived just as the altercation erupted.

Update 8/1/15. A Cincinnati officer killed in June of this year.

Posted by ModeratePoli at 10:36 PM

Was the officer justified in using deadly force to stop the driver of the vehicle from fleeing? This will be a question for a jury which will weigh all the evidence.

People stand next to car all the time as they are about to pull away without being run over. In the time the officer took to pull his gun he could have stepped back with no risk of being dragged. And while he reached in to attempt to prevent the driver from fleeing -- if that's what the driver intended to do -- he obviously could have extracted himself from the vehicle in time to shoot, so I'm not sure a claim of life-threatening danger is particularly convincing to me. If he fear for his life, why did he reach into the vehicle?

Let's not forget that the officer was NOT on campus and, hence, out of his jurisdiction. I think that plays heavily into the D.A.'s assertion. He stopped a black guy for a ridiculous reason, and pressed and pressed and pressed the issue until the citizen was put in a highly stressful position. That's not policing, even if the guy had an expired license, which the officer could not know when he pulled him over.

Policing is a hard job and can, at times, be dangerous. But police officers must be professional at all times in the administration of their duties, and this officer was not. If they panic in the face of a predictable situation, they weren't suited to the position and need to be held to a higher standard of conduct. Was it intentional murder -- with the officer looking for someone to shoot? I think the D.A. needs more to make that case. But there seems to be enough evidence for a manslaughter conviction in some form.

The police officer had another choice. He could just let the guy drive away instead of shooting him. And there was another officer down the street in the direction the car was going, and the officer knew that.

@dangerous, I keep going over the pros and cons of police use of guns, and I just can't shake a sense of fear. All too often, individual officers are targeted, and so often it comes without warning. What is that like?

The driver was calm and slow and deliberate for a while. But then he (the driver) made a very fast move in turning the ignition and in grabbing at the officer's arm. The driver changed the situation and he did it very quickly. So suddenly, it was possibly a dangerous situation for the officer. And the officer, in turn, reacted very quickly.

Now, yes, the officer could have stepped back. But that wouldn't have helped him much if the driver 1) quickly reached for a hidden gun, or 2) turned hard to the left to knock the officer over with his car.

Reviewing the situation more, as I've just done, it seems clear to me that the driver created the dangerous situation with his actions in turning on the ignition so abruptly. The driver changed the situation, and he paid a big price for doing that. However, he was the one who changed it, not the officer. The fault was with the driver.

Now, you can put all the responsibility for how to handle the abrupt change in the situation on the officer, but that would be patently unfair and unrealistic. Police aren't clairvoyants who can tell whether someone is just going to run away, but do no harm. And if an officers takes the extra seconds to wait and see-- well, we saw how quickly someone can grab and shoot a gun.

The only way to keep the situation in the safe zone is to keep the movements very slow, which is why most people do exactly that when they're stopped by the police.