Many developments in the Russia investigation. Confirmation of Trump's involvement in paying off women before the election, but no shockers. More too, but I'm not sure what's new. There was a reminder of what a scummy lawyer Michael Cohen was-- and he was Trump's lawyer. Trump lies so much that fact-checkers need a new rating, something like 'habitual conman cheater creep.'
Russian bots tried to smear Mueller--of course this happened. We could use a daily index on what disinformation the Russian bots are pushing. And, finally, is this an unrelated corruption scandal, or just typical of Russian (criminal) elite?

Working class protests in France. France, like the US, has a rural/urban divide. The rural people feel overlooked and dismissed by the traditional elites. This time the protest centers on hikes in gas prices, which hit those in rural parts more. It seems so familiar to me that I have remind myself that I don't know about the issues in this other country.

What's wrong with the GOP? Power is more important to them than the principle of democracy. Just another article about this. Similarly, they champion the idea of fake news, and not because they want accuracy in reporting. Maybe there's hope because some are acknowledging reality on the 'small government' fable and noticing what people actually want.

Don't trust InfoWars... or anyone who's been on InfoWars. Roger Stone, a slimy Trump adviser, loses a defamation suit.

Economic predictions. A round-up I might want to review in a few months.

Trump vacillates on the shutdown. Trump doesn't know what he wants or why. So he threatens a shutdown, backs away, and then demands the money to start the wall anyway. All in the space of a few days. I was expecting the reversal on Trump's part, but I didn't think the GOP in the House could put together and pass a bill to his specifications. They did, and now the Senate is in the hot seat. The Senate is still working on a compromise, a deadline has passed, so the US government is officially shutdown. Why wasn't this settled back in September, or during the summer? Because the GOP has no frigging idea how to negotiate and they wait until the last minute. 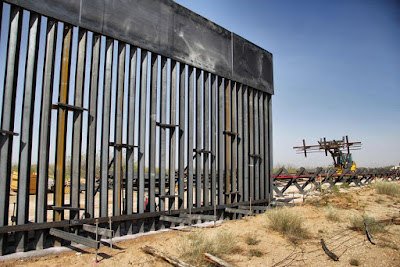 Posted by ModeratePoli at 12:36 AM