A test for Congress

I've been neglecting my blog, and I'm sorry. One reason is that the political situation isn't changing much. The players are staying the same with the same faults and strengths (mostly faults). The Dems continue to want to tax and spend, the GOP continues to want to spend and cut taxes, and Trump continues to bloviate with no substance behind it. Same old same old.

So Trump experimented with a shutdown, and that didn't work out so well for him or the GOP. He ended the shutdown by taking a deal to reopen government at status quo for three weeks. My sister (a federal worker) got to return to work and a paycheck.

During the three weeks, the less stubborn people in Congress would try to work out a deal, and Trump would perhaps throw bombs, but not have the power to nuke them as they worked.

I wasn't at all sure that the people chosen for the negotiation teams would be able to do it. Remember the epic failure of the sequester-alternative committee in 2011? That could certainly happen again, but it didn't. Cooler heads prevailed, and they made a deal.

Predictably, Trump wasn't happy with the results. Dems have a surprisingly strong hand because they can wait out the GOP, who are desperate to make a deal and not get blamed for another shutdown. The Dems were able to make a rock-bottom offer to the GOP, hold their breath, and the GOP negotiators blinked and accepted. (My guess, but the details of the deal will probably bear it out.)

That's how it's gone for the past 7 years. GOP is slow to negotiate, the clock ticks away, and the GOP have to take a crummier deal than they'd get if they'd laid out their positions at a reasonable point in the negotiation process.

If I ever see the GOP negotiating early, I'll let you know. Until then, the GOP can continue to expect unfavorable deals on everything that they can't pass via reconciliation. With the Dems controlling the House, that is everything for the next 1.9 years. My prediction: continued choking by the GOP. Same old same old. 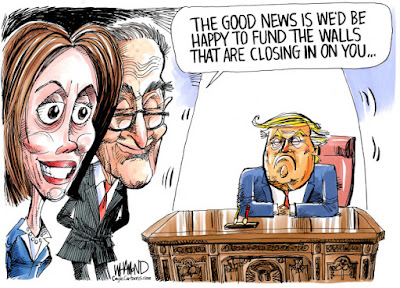 Extras. An inside account of the negotiation, which worked because it was delegated to members of Congress who had respect for one another rather than adversarial relationships. The leaders kept out of the way, mostly. The deal almost fell apart on a poison pill (restricting the number of beds for deportees in process), but that was dropped.

Update 12/2/19. I've been saying for a long time that many of the Republicans can't or won't negotiate. This article shows it again, with GOPers in the Senate doing almost nothing beyond confirming judges and keeping the money moving around (that is, avoiding shutdowns). For the pressing problems in the country, nothing is being done. The problems remain, and the debt keeps rising. Sigh.
Posted by ModeratePoli at 1:30 AM