The symbolism of the wall

Trump promised his loud rallies a wall on the border with Mexico, and that Mexico would pay for it. His fans ate it up, though it's hard to tell if they really believed it. The wall was supposed to close the 'open border.'

I'm not at all an expert on the border. I don't know if a wall will be effective, or just an expensive boondoggle. Very few in the US have the information to make an educated decision on that. Instead, they have grandstanding which has turned the wall into a symbol.

On one hand, the wall will close border to illegal crossings. Crime will drop. Drug smuggling will drop, Human trafficking will drop. Illegal immigration will drop. Deported criminals will stay safely away from the US. The US will finally have meaningful control of this problem area.

On the other hand, the wall is immoral (I'm not sure why, but maybe because it closes the US as a necessary refuge). The wall won't be effective because people will tunnel under, cut through, climb ladders and go over, fly in, and cross with illegal papers. It'll be harmful to migratory animals, cost way more than projected, ruin the landscape, and result in the loss of land to many landowners.

Wall proponents point to the wall on the West Bank of Israel, and how effective it's been. It's 440 miles long due to numerous jogs and fingers to enclose Jewish settlements on West Bank territory. Much of it is concrete slab, though some is stacked barbed wire thickets and some simple barbed wire fencing.

The US-Mexican border, in contrast, is nearly 2000 miles long. Jogs wouldn't be needed, but monitoring and maintaining that stretch is still a massive job. Some of the terrain is reportedly difficult to traverse and build on, so may be a natural barrier.

But the argument is not so much about the plausibility and efficacy of a wall. It's a back-and-forth, without hard data or expertise, of two factions that don't know much but adhere tightly to their positions. Is the wall necessary and effective for controlling negative outcomes associated with the border, or is it immoral, pandering symbol that we shouldn't spend $1 on (as Nancy Pelosi said). So what is an argument where there are no facts being used? A shouting match maybe? I'm not interested in shouting matches. Get me some experts, real experts, not fake ones. Thank you. 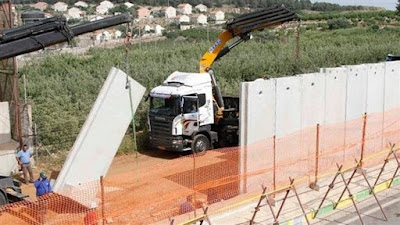 Extras. Trump's reelection slogan will be "Finish the Wall," which will continue the pattern of symbolism without substance.
Posted by ModeratePoli at 6:39 PM