Finally there is a real voter fraud scandal

Conservatives have been lying about voter fraud for nearly two decades. Or let me clarify. They have vehemently been making unsubstantiated claims repeatedly. Their goal seems to be to cast unwarranted doubt on any Democratic victories, and has nothing to do with telling the truth about election processes. So calling them liars is completely deserved.

Finally there is a big, undeniable voting fraud scandal. It has nothing to do with false impersonation or non-citizens voting. Instead, it involves the area that is most rife with fraud, which is absentee ballot voting. Why haven't the GOPers focused on this before? Because they're liars and were hoping to institute measures that nominally hurt Dem voters.

In this scandal, consultants for a GOP candidate running for a house seat hired a known local operative to round up absentee ballots. He paid relatives, neighbors, and friends to help with the work, which involved knocking on doors, getting people to sign the ballots, walking away with unsealed ballots, and filling them in later. Maybe I need to add 'allegedly.' However, there are numerous affadavits about the activities, including how the operative would get a $40K bonus if his candidate won. It looks very likely that a new election will be called. This is rare, but the level of fraud is substantial and the candidate thoroughly tainted. It would be travesty to certify the election, and it appears that will not happen, so a repeat election will be necessary.

This happened in North Carolina, but it could easily have happened elsewhere. The fraudsters are on the GOP side, but it could have been otherwise. However, make no mistake, the GOP chased other non-frauds and ignored this sort.

Will GOPers change their talking points about voter fraud? One would hope, but that wouldn't be typical of the GOP. They cling to their lies. 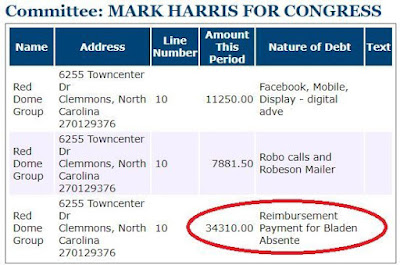 Posted by ModeratePoli at 1:26 AM

One could argue that this kind of REAL vote fraud conducted by the GOP is both cause and effect for the lies. They assert all sorts of fraud by their opponents as a reason to suppress their votes any way they can (voter ID, reducing ballot access where their opponents reside, etc.), and also encourage their own supporters (and candidates, in this case) to engage in fraud to supposedly balance out their opponents alleged fraud.

Naturally, Republicans argue that the fraudulent results from their efforts that favor them should stand, while the legitimate results when their opponents win are tainted. This is a kind of double-double standard that now the GOP INSISTS UPON, in all policy debates where their electoral interests are involved.

There's a reason voter fraud is so rare. It is hard to pull off on a scale like this and not be detected, and it has to be of sufficient scale to turn an election to be of any use. Conspiracies among a lot of people can't be kept quiet, but control of the process can twist the rules or make it harder to press such claims. But for individual voters, there's no incentive to engage in vote fraud since the penalties are (rightly) severe and potential advantage gained is small. Hence, going to great lengths to prevent individual voter fraud only succeeds in massively reducing legitimate voting (which is what they are after anyway) and the hubris of controlling the election apparatus inspires some GOP operatives to pursue every advantage on the presumption they won't be caught or can finesse it.

In NC, that same methodology worked in prior elections so it because de facto legit as far as the GOP was concerned.