While there was clear and definite absentee ballot fraud in North Carolina, Republicans were doing this accusation thing about California. In California, voting by mail is so common that 43% of votes are tendered that way. So 43% of the vote isn't counted on election night, but counted afterward.

Republicans were hinting that elections were stolen even though they knew how and when ballots would be counted. Well, no surprise there. The Republicans are inveterate liars when it comes to elections. They spread so many falsehoods that anyone else would be embarrassed.

California has allowed some questionable practices, though. It might be extremely easy to illegally register to vote in California, or was a few years ago. I went the website, gave an out-of-state address, and the process didn't grind to a halt. I might have become a California voter except that I bailed before committing a fraudulent act. If there was any checking, it wasn't evident.

Now California is allowing people without a close connection to pick up absentee ballots from voters at their homes, and turn in or mail in those ballots.This is called 'ballot harvesting.' I don't know what safeguards they have to prevent fraud. Do the ballots even have to be sealed before being picked up? It's not clear.

Considering how frequently California is accused of high levels of non-citizens registered, one would think that California would be conducting transparent checks of its voter rolls, and announcing the findings. But that's not what they've done. Instead, there is very little about verification that their systems work. In the absence of data, Democrats tend to shrug, and GOPers continue to go apeshit. Instead of assumptions, let's have some actual hard information, ok? 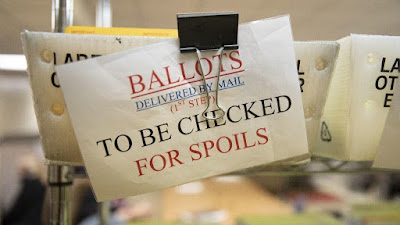 Extras. Conservative media reporting on California absentee ballots regularly neglected to mention that ballots must be postmarked by election day to be valid. Other media outlets seemed to have no trouble mentioning this. I wonder why the discrepancy? Alas, my examples have disappeared.
Posted by ModeratePoli at 7:56 PM