I published a thesis that many conservatives just can't stand for a Democrat (or any Democrat to the left of George Wallace) to be elected to the presidency. This is a problem because the constitution isn't set up to bar Democrats, in fact far from it.

From my memory and observation of political history, this irrational hatred of Dem presidents started with Clinton. But why him? There isn't going to be a scientific answer, so you can agree or disagree with my speculation, and that's fine because there won't ever be proof either way.


Coming up: Speculation
Here's what I think: Clinton was treated this way because he was seen as a traitor or a turncoat. He was born into lower-class Southern society. So far, it's good, but then he went to Yale (worrisome), and married a northern liberal (huge red flag). I don't think the draft-dodging and marijuana non-inhaling really mattered because both were  common among the campus conservatives too. So Hillary was the first problem.

Then was the reform of the military policy to hunt and discharge homosexuals (Don't Ask, Don't Tell). Clinton showed he was going to be gay-friendly. He was already seen as black-friendly. The health care reform commission showed more willingness to pursue a liberal agenda.

This was deeply dangerous to the GOP, because if he was successful in reforming our awful healthcare system, he could earn for the Democrats the loyalty of a lot of Americans for another generation, just as FDR had done with the New Deal and just as the Great Society had. The Republicans were overwhelmingly successful with their messaging, and Clinton was stopped flat. However, the GOP didn't let up after this victory, They kept on for the rest of his two terms as President and continued smearing Hillary (as a senator) after that.

Why did the attacks continue unabated? It wasn't because he was trying to enact a liberal agenda because there wasn't a let-up during or after welfare reform. It didn't let up when Bill was at the end of his second term. So why?


Speculation and Pop Psychoanalysis
The only reason I can think of is that certain groups think they should have electoral hegemony, they were frustrated in this desire, and their revenge was endless attacks.

Which groups might have developed this sense of ownership? Groups that have had many decades of unbroken power.Two groups fit this description: southern conservative whites and northern liberals, and perhaps add in western and mid-western conservatives.

So now we are basically caught in the crossfire between two entitled political groups: southern/western conservatives and northern liberals. They are both conditioned to getting what they want, they throw the hugest tantrums, pull non-stop dirty tricks, and may blow up the political system if they don't get what they want. The Dems have been tamed a little, by none other than the Clintons, but no one has tamed those entitled conservatives.

I hope for a repudiation to both groups, but that didn't happen in '06 or '08, or '10. It doesn't look likely to happen in '12. I hope this country isn't stuck in an either/or rut, where the choice is crappy conservatives or crappy liberals. I don't know when I'll give up hope for some sanity and moderation. Not yet, but it's getting closer. God help us all. 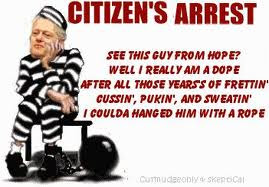 Extras: Conservatives explain (or rationalize) why they hated Clinton. An idiosyncratic scorecard of presidents.
Posted by ModeratePoli at 7:23 PM