Tribalism as a reflex

I've been following the Trayvon Martin case since it went national. I don't see it as primarily a racial issue, though it definitely has racial tones in it, and I can easily see why blacks are roused to demonstrate. Anyone could be roused, but the case is going to have particular resonance for people who feel targeted for suspicion.


The Beginning
If I remember correctly, the national coverage started on Monday, March 19. By Friday, it was the biggest national story. Demonstrations had been organized. Al Sharpton was down in Florida. Obama, Gingrich, Santorum, and Romney all commented on the case. In general, they each said it was a tragedy that should be investigated thoroughly. For the life of me, I can't see anything wrong or offensive or even partisan in such a sentiment. It seems logical to me--someone dead by gunshot, therefore a need to investigate how and why and to determine if there was a crime.


Getting Nasty
How did we go from that logical sentiment to the conservative media circling the wagons? I can try to trace all the steps: Gingrich criticizing Obama for noting that Trayvon and he were could have been family (read: were the same race without saying 'race' or 'black'); the stupid hoodie comments by Geraldo Rivera. But then the reaction on the outer right seemed to go crazy. (Note: I'm not even going to touch the comments on various blogs because people are always trying to outdo one another in outrageous statements.)

Some conservative blogs, including some within the conservative mainstream, started trying to portray Trayvon as a thug, which is hard to do when he'd never been arrested. In lieu of an arrest record, they used his posed gangsta photos, his suspensions from school, and the braggadocio on his twitter account.

In the meantime, CNN was reporting all the developments regardless of whether they tended to support Zimmerman or the Martin family. They reported the statement from the unnamed neighbor who saw Trayvon over Zimmerman on the grass. They reported about the demonstrations, they displayed the video of Zimmerman in the police station and the picture of Trayvon with the gangsta-style gold tooth ornament. The only information they didn't pass on were the hacked emails (many of which weren't authentic) and the tweets.

It's not clear to me why part of the conservative media went so negative on Trayvon Martin. It was known that he was unarmed, so why is it important to show Trayvon was a thug?


When You Don't Know Why
I don't have a logical answer to this, so I have to reach for an emotional reason. This story got a lot of traction, and it fits many points that Democrats/liberals/progressives make: there is racial profiling that hurts blacks, even resulting in death; police don't fully investigate the deaths of young black males; black males are presumed to be guilty of something; assailants, even when known, can get away scot-free with killing a young black male. A new concern is that Florida's Stand-Your-Ground law will result in even more deaths of young blacks that aren't investigated or prosecuted.

The story works so well for Democratic/liberal/progressive narrative that conservatives are left grasping at anything they can to lessen the impact of the story. Not all conservatives have felt this need. Many are treating this as largely a legal and police procedural matter where the state investigators and the courts will have to determine if Zimmerman was justified or not. These sane conservatives haven't felt the need to defeat the story.

The others, however, tried to shred the story, criticizing the media (of course, a favorite target), black spokesmen, Obama, Hispanic organizations (for not tribally supporting Zimmerman), the special investigator, and most cravenly, the dead boy.

Why is it so important to defeat the story rather than letting it play out? Is all news a zero-sum game, where the points your opponents can make should be blocked whenever possible, no matter how?

For some partisans, this is undoubtedly true. But why can't some, who have more responsibility because of their roles on news sites, let go of the competition and let the Democrats win those points? Instead, in their unwavering, single-minded tribalism, they try to smear whomever they can, and just end looking like the foul sewer floaters that they have become. 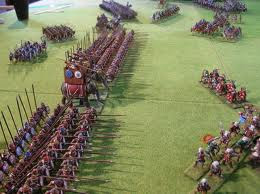 Battle lines
Photo credit: cleftintherock.org
Extras.
Disclosure: I lived in New York at the time of the Tawana Brawley case. I haven't forgiven Sharpton, and there is no way I can be fair or neutral about him.

Updates. There are too many to mention. Click on the label "Trayvon Martin" to see more.
Posted by ModeratePoli at 9:55 PM

There is nothing to be gained politically by trashing Martin, an unarmed teen returning to his father's home after getting snacks, and reflexively defending Zimmerman, a man with a documented pattern of irrational violence. Yet many conservative bloggers are doing it anyway, completely lock-step and knee-jerk.

They could have simply critiqued the way the media and left of center activists have handled the story, or they could have stepped aside by declaring neutrality and waited for the process of discovery to proceed. But no, they feel that it is incumbent on them to destroy Martin, making mountains out of grill-displaying photo and immature twitter handle molehills, and valorize Zimmerman, when the smart and sane thing to do is to metaphorically throw him under a bus. They have tied their reputations to the fate of his side of the story.

Groupthink in action, even at their own expense. And it will be at their expense, because Zimmerman's case is (frankly, not unexpectedly) disintegrating. This kind of self-defeating groupthink is not a uniquely conservative trait, but it is interesting to see it play out in real time.

I agree with a lot of what you wrote, so I hope you don't mind a few quibbles.

I don't think the conservative bloggers are in "lock-step" because many aren't following the line of trashing Trayvon. Many are doing what you say in your paragraph--critiquing the coverage and reminding people to let the investigation proceed.

I tried to highlight the two different ways to handle the issue on the conservative side: measured or tribalist. Unfortunately, too many are going with the tribalist approach.

MP, I agree with your "tribalism" critique, but conservatives are hardly the only ones to rush to judgment in this case.

They're also not the only ones willing to say anything in an attempt to "win one" for their side. I've seen a number of gun control advocates say some variation on "you can kill anyone who looks threatening to you in Florida" which is not only factually wrong, it's potentially dangerous.

@Couves, I realized today that virtues are often clustered, but the vices always seem to cross the boundaries. Always.

You win a prize if you can think of a vice that exists on only one side of the political divide.

Concerning overreaction on the 'liberal' side, I wish the New Black Panthers were hauled into a DA's office and told that they had one day to withdrawal their bounty or they'd be charged with solicitation of a felony. But maybe that's not the best move right now.

Just for grins, where do you see the virtues clustering? It isn't a surprise that the vices, being so much more numerous, are also more evenly spread.

@Anastasios
I think that 'thrift' is clustered among some (only some) of Republicans. I also think that sacrificing for the poor is clustered in the Democrats. I realize these views are open to dispute, and I can't defend them with statistics--they are impressions that have stood the test of time and questioning.

And, of course, certain political ideals are also clustered--such as encouraging independence.

Now I doubt my examples produced any grins. But do you see what I meant?

Depends on what you see as a virtue, I guess. Which is where so many of our problems come from. Thrift is selfishness to many, and not a virtue. Concern for the poor in one man's eyes is sentimental claptrap in another's, and not a virtue. Independence is cruelty, expertise is elitism, national defense is stupid boyish violence, civil rights are special rights.

As I recently said over at Bernstein's Blog, increasingly Americans simply have nothing to say to one another. Hard right types are wrong that the left wants them dead -- but increasingly many on the left quite simply want them gone. Many on the left think that hard right types want to simply define liberals out of the definition of American, and they are probably correct in that suspicion. Bit by bit, day by day, outrage by outrage, we have come to a point where we really don't like each other anymore, and would prefer not to share the same country.

It is all very bad, and the Martin case has brought it out into the open. But until the thinking of the public changes, bad is what we are going to have.

By thinking of the public, I should have said until all our thinking and automatic reactions change. I think what happened in the Martin case is that people on all sides almost instantly went from the bare facts to a complex emotional reaction along the lines of:

I am so sick of THEM! I can't read a paper or watch TV or surf the net without being mortally offended by THEM! If only THEY would go away we could actually deal with our problems. But try to do anything and THEY fight you tooth and nail! I do not want to be in the same country with THEM and THEIR stupidity any longer.


Given that we live in a hyper competitive society where every political, social, and economic reaction registers as a win for someone and a loss for someone else, I am truly afraid that these emotional wounds are re-opened a dozen times a day for a lot of people. It doesn't help that our political system (unlike, for instance, European systems) just isn't designed for this kind of antipathy and is trembling on the edge of a nervous breakdown, or that the media is a flood with people making millions by exploiting the bad feelings.

I know that in the best of all possible worlds we could work through this to some kind of social peace. Maybe we will, one day. In the meantime, however, a lot of people are moving along the spectrum from annoyance to anger to outrage to dislike to bitter hatred. And the people they are coming to dislike, and unfortunately sometimes hate, honestly think of themselves as being virtuous.