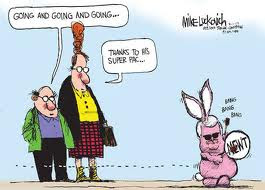 I've already declared that Newt is the dead candidate who doesn't know he's dead. He's still proving me right. He won the Georgia loyalty pageant, but his campaign actually said on Wednesday that he'd have to win Alabama and Mississippi to stay in the race. Ah, the sweet hope that a likely loss in Alabama would end this vanity campaign gone wrong.

Unfortunately, he reversed that by Friday, and now he declares that he's going all. the. way. to. Florida. That wipes the glee from my heart and the smile off my face.

Imagine Newt as the Energizer Bunny, just going and going. But instead of banging a drum, his mouth keeps on running and running with spewing lies and grandiosity.

Tell me that doesn't make you want to reach for a sledge hammer . . .

Update 3/26/12. Gingrich's campaign is so broke that he's charging $50 for photos taken with supporters. His aides take down the credit card info while you're in line.
Posted by ModeratePoli at 11:12 PM

I guess this is what happens when the media still pays attention to your campaign. Instead of dying a mercifully quick death, voters get to watch its death throes because the media is still acting as though Mr. Gingrich's campaign is relevant. For the rest of us, it's kind of like rubbernecking at an accident - you know that you should, out of politeness, avert your eyes but you just can't help but stare.

I hadn't noticed before your restrictions on the use of certain words, among them "libt@ard". Thank you! I always find it most insulting when so-called discourse stoops to the level of Grade 2 playground bad-mouthing!