No emergency money without concessions

It makes plenty of sense to me that the GOP, with their strength in the House and Senate, should attach some strings to the money for the immigration crisis. People don't usually open the wallet and get nothing in return. However, Dems think they aren't bound by this.

The Republicans want a change in a 2008 law so that central American immigrant minors can be sent home as readily as Mexican minors can. Immigrant groups are flexing their muscles, and have gotten Nancy Pelosi to oppose this change. But without the change, no extra money.

What will the Obama administration do? They can divert funding, which is probably not legal or they wouldn't be asking for the money in the first place. They can use their emergency authority under the 2008 law to send the minors back quickly, thus saving some money. Or they can make the deal with the Republicans. I don't know how badly they need the money, though it does seem that extraordinary measures are taking place--minors transported to lots of different facilities, warehouses and other buildings being converted for temporary use as detention centers. That sounds expensive.

I don't think the administration can continue to slow-ball the handling of this surge of young immigrants. These refugees aren't going to get the drawn out hearings that have been customary. Instead, the process will have to be expedited, much to the disappointment of immigrant and Hispanic groups. If Obama really does need the money, he has little choice but to agree to the concessions. 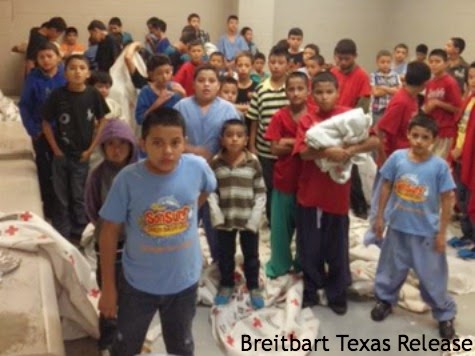 On second thought: It's going to be hard for Obama to put together a deal. Some Republicans are definitely going to vote against it, so Obama needs some House Democrats. If Pelosi is signaling to her pawns how to vote, will there be enough votes for whatever deal is negotiated? That will be close.

I have to wonder what is worse: the current configuration of power in Washington, and whatever the next stage will be. I'm fed up with them, but I'm terrified should any group gain a lock on power with House, Senate, and presidency.
Posted by ModeratePoli at 3:05 PM

I think you have the politics of this backwards, MP. It's the GOP that wants something, not the president.

The load voices that back the GOP -- and to whom the politicians must pay homage -- just want the kids out, gone, deported. But the law doesn't allow for that and, frankly, most people without a racial ax to grind see that as cold-hearted. Now, those same people probably don't want those kids in their neighborhoods, either, but at least they are conflicted about it.

So Obama wants money to speed up the process but has the humanitarian high ground. Congress doesn't have to give him the money, but then they don't get what they want. So I think slow-walking is fine with the administration.

Let's not forget that many of those kids have relatives already in the US (which is why they were sent there in the first place) and charitable organizations are stepping up to help them, too. Meanwhile, politically the Dems like that the GOP looks like Hispanic haters (not far from the truth).

No money and no deal. The fact is that it's an annoyance for us, not a "crisis". It's a crisis for the kids, but they are better off in the US than at home.

@dangerous. You say "It's the GOP that wants something, not the president." Did you forget that the prez asked for $3.7B? Did he not need the money to deal with all the housing for these kids?

The GOP pays homage to certain groups, but so do the Dems. Someone flexed their muscles to get Pelosi to change her tune.

I'm not at all certain that it's a new crisis in these countries causing the influx. Refugees can easily be coached what to do (surrender to border agents) and what to say (I've been threatened).

Is the press carefully investigating this? No--the liberal line is good enough. The MSM is a mediocre source of information, outdone only by the propaganda and lack of standards of the conservative media. This is just another story that shows it.