Nietzsche is commonly credited with offering an alternative morality, where the supermen didn't have to follow the same rules as the sheep the rest of mankind. I haven't read much Nietzsche, so this may be a misrepresentation, but let's pretend it's accurate.

Ayn Rand thought that the bureaucrats and leeches were holding back the greatness of society. This is somewhat a tenet of libertarianism, that we all need to be free to soar as high as possible, free from the regulations that would tether us to mediocrity. Those tethers include anything beyond minimal taxes, gun restrictions, licensing for professions, FDA drug testing, regulations, and paperwork showing compliance with vast numbers of government rules, etc. They also include the social safety net. I'm going to focus on the safety net.

Some people need the social safety net. That's why we have it. Before governments got into that business, there were churches and charities that tried to handle the load but were often overwhelmed. I assume charities were overwhelmed. Perhaps they weren't and it was just a trick some liberal busybodies dreamed up in order to make jobs for themselves. But I bet charities were frequently overwhelmed.

So we've had and needed a social safety net. Yet Ayn Rand was against that net. I can understand if she thinks it's better never to use the safety net, but why should it not even exist? It exists because people have needed it in the past, some need it now, and other will need it in the future. But other people's needs are unimportant to the Ayn Rand archetype. The Ayn Rand hero will never be that needy person. The superman doesn't need the safety net, and the world should be for the supermen, not for the sheep. So, no safety nets for you sheep either.

In the Ayn Rand view, it's too bad that the sheep of Europe even pushed for these safety nets starting back in the 1800's. The sheep of America followed. That's a problem, having these sheep make decisions about what government is going to do. They make sheep-like decisions. The sheep become more sheep-like and dependent, and the supermen are weighed down. Government should be limited so the sheep can't decide what's to be done. [By the way, doesn't this sound suspiciously feudal? The nobility should make the decisions, and the peasants should shut up and be good mules.]

I hope I've shown a strong similarity between the philosophy of Ayn Rand and Neitzsche. Perhaps I'm overreaching here, but I don't think so. I wondered for a long time why people are so adamantly against Social Security, a program that has such broad appeal. Why isn't it good enough for anti-SS folks that large numbers of people want the program? Isn't that democracy?

No, democracy isn't a good enough reason. First and foremost, the country should be as free as possible. That's what libertarians strive for. Nothing, not the wishes of the majority for a social safety net, should overrule the primary guiding principle of the country.

On one hand I can see the logic in this. On the other hand, in practice the people of this country (as in "we, the people") took the country in the direction it has gone. This country wasn't invaded and hijacked by Russians who changed our government by fiat. WE changed it. And there was a logic to the changes that we made.

So the libertarians aren't the only ones who have a logical, reasonable view of how our government should work. They have lots of competition, and they've been losing. We, the People, don't want the Ayn Rand or Nietzsche philosophy. The elections tell us that. 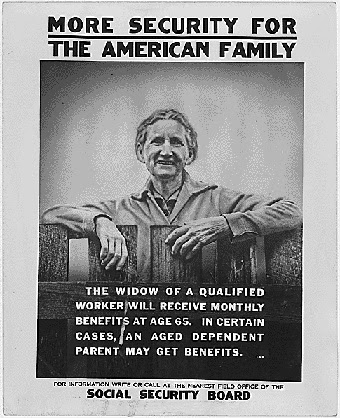 Posted by ModeratePoli at 2:06 PM

That is, libertarians and Randians lost the argument. And rightly so. Nobody is a superman and nobody is above the law.

Do regulations, taxes and limitations on freedom hold people down somewhat? Of course!! If not for those rules and laws, and a means to enforce them, many would soar by using their power to overwhelm the powerless and take what they have, be it money, clean air or water, or their own freedom. A powerful corporation or oligarchy can hold you back as much or more than a powerful government. The key is a free democracy and the other basic freedoms outlined in the Constitution.

But none of those freedoms are absolute, either, including freedom of speech or conscience (religion). While it has it adherents including some loud and/or powerful people, Rand's philosophy ultimately loses every argument because it can't hold up to cross-examination. Every argument they make ends up looking convenient for them at the expense of someone else, when they are forced to answer for the results of their own proposals.

@dangerous, I have one tiny disagreement with you. Randians don't lose EVERY argument, or else they'd have no adherents.

But they lose most arguments because, yes, they don't hold up to cross-examination. This is a case of "good in the abstract, crap in practice." That could be said about every position held by Ron Paul--I'm pretty sure of that.

Does the author understand what is wrong with majority rule? What is its difference from dictatorship? What are individual rights? And what are they founded on? What is the nature of reason? Is it an absolute or can we simply act on our emotions or our whim? What is the cause of Nazism or Communism, and why did 10s of millions of people die under their rule?

Ayn Rand knew these answers, and anyone who seeks the answers can find them in her works or those of her adherents. When the author understands the answer to these questions we can continue the discussion. For those who do not care to understand, let the burden of the consequences be their guilt.

@Henry, what a bunch of bunk. Every country I know that has a constitution has provisions for individual rights. No constitution condones the majority legislating away those rights. More often what happens is that smaller groups get control of the government (or always had control), and they ignore the constitutional rights. The idea that the majority does away with them is bunk. If you disagree, give an example where rights were removed by a plebiscite.

Democracy isn't what caused the Nazis or the communists. These were power plays by small, armed, organized, ruthless groups.

If you think there's logic to the argument that we either must follow Randian precepts or we'll end up in a totalitarian regime, you're mistaken. That's a fallacy that it's either X or Y. There are thousands of choices in government; it never comes down to two or three forms. Such ramped up statements show how little thought has gone into your position. It's more sputtering ("Oh, but communism was horrible") than a reasoned argument.

Finally, I'm pretty sure we had a libertarian government in the past. Business and markets were barely regulated, and cheating abounded. There were enormous problems with trusts and corporate exploitation of anyone who wasn't stronger than the business. Our libertarian experience was a bust, and we, the people, demanded breaking up the trusts.

So, not one of your arguments stands up. That's a very poor showing.