Congress is deadlocked, and therefore has nothing to do (well, close to nothing). Boehner wants to present the semblance of activity and gravity, so he's decided to sue the president. He's got to do something, and it's better than some of the alternatives, like letting a committee research impeachment issues. What a circus that would be. So a lawsuit provides the veneer of activity and gravity, but it moves ever so slowly.

I thought I heard that the lawsuit was already filed! That would be huge news, but I was mistaken. No, Boehner has announced that it will center on one issue--just one! That's better than the kitchen sink approach, and it definitely prevents some jerk from throwing in questions about Obama's nationality. But it also feels like weak sauce.

Boehner still has to get the draft of the lawsuit done. I predict he'll stretch that out for a while. He's also going to offer a resolution for the House to vote on that directs the House to make the suit. That adds another gating device to slow things down a bit.

The House was supposed to have hearings on Benghazi, but I haven't heard anything else about them. I thought it was supposed to be this summer. Is that not going to happen after all? It's hard to tell. Maybe Boehner thinks it's a vote-getter, so he's saving it for the fall campaign season. Or maybe he thinks it's a loser, so it's been quietly buried. I can't tell, but I'd put better odds on the burial.

The Democrats in Congress don't have anything to do either, but they're quieter in that mode. Republicans should learn the lesson. 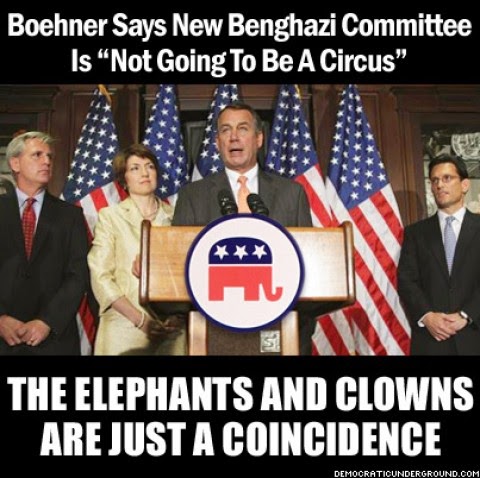 The lawsuit idea is, of course, stupid. Hence it has appeal to those who are easily fooled or stupid to start.

As a legal matter, establishing standing to sue on something like this is a major hurdle. Plus, they leave themselves open to political charges that they are DEMANDING that businesses cover their employees or pay the penalty!! This is hardly what that GOP constituency wants to hear, but they are smart enough to know it's going nowhere. But for low information voters ...

Further, the court has to actually be able to provide relief to the plaintiff that the plaintiff cannot do on its own. Courts can order presidents to do things, but the president can ignore it if it's impractical or impossible. The court has no enforcement authority due to that separation of powers thing in the Constitution.

So all Boehner can get two years from now is some sort of PR victory that a judge agreed with him. But that's at the risk of a PR drubbing if the judge just throws the lawsuit out.

I read that Boehner is in zugzwang, which is a chess term that means that any move you make loses, and it's your turn. Boehner and the GOP think they have the upper hand going into November. They may be right but polls don't show that definitively yet. They want to get the Senate so they can harass Obama and the Dems with their petty investigations and self-serving-Fox-approved agenda.

The real lesson is that this is what happens when the president eschews politics for compromise when his opponents won't.