This article (oops, can't find link) points out that Hillary's high approval ratings, which made her look so good as a potential nominee, were artificially high. While she was Secretary of State, she was out of the domestic disputes between Dems and GOP, and the conservative press didn't bother attacking her ... until Benghazi. With largely good press, her ratings went quite high.

Now she's back as a figure to attack and humble. Attacks are way up. She's made a few blunders of her own. Consequently, her ratings are steeply down: currently 44% favorable to 37% unfavorable. Plenty of reports, and maybe some Hillary interviews, have reminded us that we don't like Hillary all that much. Oh, we fickle Americans! 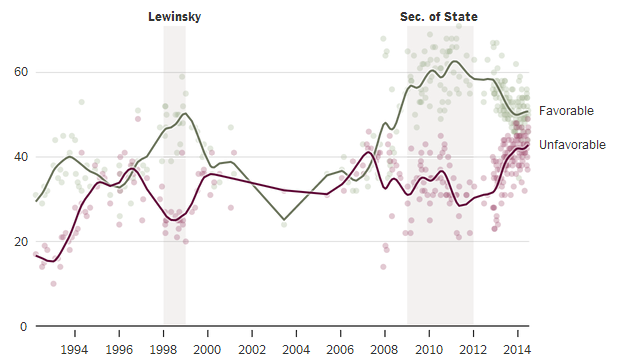 +7 for a politician so well known? That's pretty good. Do any other national politicians have numbers as good?

Plus, only 37% unfavorable? Unless she's tarred with something new and real, that's a number she can win the presidency in a landslide.

@dangerous, you're correct that her net favorables are still pretty good. I also think she can win, and that's my prediction even this far out.

This post is mostly about how her favorables were artificially high. That's a interesting story. At least I thought so.