Painful realization: Too many immigrants

Here is yet another painful realization. We have too few jobs and too many immigrants taking them. This is painful to say because I love immigrants and identify with them. My immigrant grandfather inspires me, and I'll never be half the man he was. I love the cultural diversity that immigrants bring, especially the differences from American norms. It's good to see how other people do it.

So it is with visceral pain that I acknowledge that the level of immigration, particularly illegal immigration, needs to be curtailed. We need to tighten up the borders, but more than that we need to crack down on businesses that employ illegal immigrants (and legal immigrants with special visas). This is going to be painful, especially to immigrants who have built better lives for themselves. They had very American hopes to work and prosper, and it's going to end for some even though they are good people. Yes, this will hurt good people. Make no mistake about it. However, good people are also being hurt by the lack of jobs, so it's not as though no one benefits.

I won't give a detailed proposal because I don't know the numbers well enough and, heck, any detailed proposal from an amateur wouldn't get a second look. However, I think we should have a certain number of guest workers. We definitely need immigrant workers for agriculture if we want abundance on our grocery shelves. We should also allow some of the 12 million illegal workers in the US stay to prevent a humanitarian disaster that would occur from throwing so many out of work all at once.

Many people don't want to face this. We hope everything will work out OK. Maybe we'll have amnesty for those hard workers who have been in the country for so long, or maybe we'll keep the status quo, which is better for the immigrants than returning to their home countries.

However, some groups support amnesty or the status quo for reasons baser than love for immigrants. Business owners like cheap, reliable labor. Democrats look forward to more Dem-leaning voters. Too bad. What they want isn't for the overall good of the country, so it shouldn't matter. 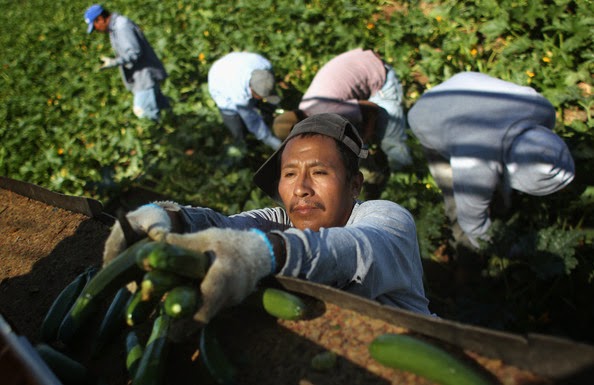 Posted by ModeratePoli at 1:51 AM