One commenter told me a few years ago that I'd have to pick a side. He used a metaphor of a hapless person trying to walk the center line of a street. People in the middle don't get anywhere, and are very likely to be run over by the travelers on either side of the road.

Well, this is partially true. I get attacked by both right and left out on the comment threads. (I also dish out to both sides, so it's fair that I get incoming too.) However, I've got lots of company on that center line. From this Atlantic article:


"Moderates wrestle with, and often reject, what they see as the false either/or ideological choices that define modern politics..."

The article is full of compliments for moderates, which isn't surprising because it seems to be mostly a PR piece from a moderate lobby group within the Democratic Party. How long will it be until this group is roadkill? 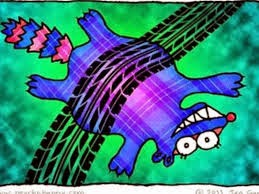 Posted by ModeratePoli at 8:21 PM

"Roadkill" is a little extreme, and I don't think any reasonable person expects someone whose allegiance to a political party or ideology requires "picking sides" and always agreeing to the powers that be within the party or ideological thought-makers.

The only time I'd say that so-called "moderates" become roadkill is when they decide that both sides of an argument are equal by default and don't question the facts or logic that might well be lopsided. You're not typically a victim of that, MP, since you research and study and analyze for yourself. Good for you. Not so with most people surveyed and self-identified as moderate.

Due to the decades-long labeling of the parties -- both self-described and opposition-described -- most "moderates" think of themselves as "independent", in that they don't accept either ideological party's position as fact. Most people trust their gut and vote or side with their intuitive notions of good or bad.

Yet, the labels and enforcement of ideology are inherently unequal between this generation's Democrat and Republican parties. Today's GOP eschews facts and enforce ideology much more stringently than the party of last generation, and I'm talking about time not age. The Dems haven't changed much at all, except that with the Dems who didn't toe the line were ultimately defeated by Republicans. In that sense, moderate politicians are the roadkill, not the voters.

Would today's GOP tolerate a Joe Manchin, who only supports their ideology some of the time? I think not. He'd be primaried out or sidelined from any position of power.

The simple fact is that with few exceptions today, the Democratic party are prepared and willing to govern, and the GOP is not. I understand that moderates and independents want compromise. But it can't happen if one side -- Republicans -- refuses to do so as a strategic political decision. In turn, that requires the Dems to litigate and litigate or they become the roadkill.

So ultimately moderates are not the roadkill. Since they often decide elections they are actually the car. When independents finally vote or decide -- with out without accurate facts or solid critical reasoning -- they run over either the Dems or Republicans in the lane they choose. If they drive down the middle, they are the ones forcing the parties to shift to the edges.