Short: A Batch of Hillary stories

There was a fun batch of Hillary Clinton stories yesterday--certainly the first of hundreds of stories we'll have to endure between now and when Hillary is no longer a candidate and/or president.

What's funny is that some of the non-conservative press are going after her. It's not news that some progressives loathe her, but I didn't expect to see hit pieces on sites like the Daily Beast. Now I'll expect it.

So what are the Hillary stories? Hillary laughed while talking with a reporter about one of her law cases involving a rape of a 12-year-old girl. That clearly disqualifies her for high office ... some people mistakenly hope.

What else? The Bible is one of the most influential books in her life. She's now carefully immunized herself from the gotcha accusation that she didn't mention the Bible. No points for candor, but what can you expect?

CNN gave her a sloppy wet-kiss of a profile. I could add others, but this is a good round-up for one day. If it doesn't get a lot worse, we'll be calling her President Clinton before you know it. In fact, I'm ready to put it on my prediction list (barring health issues). 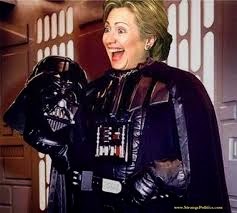