Eric Cantor lost his primary to a Tea Party challenger, and the political world is behaving like it was a massive earthquake.

The lesson is one that the GOP had already learned--you have to run hard if you've got a Tea Party challenger. Cantor didn't, and he proved the conventional wisdom. But we already knew it!

I don't know if the Tea Party is crowing over this victory and the few others they've had. However, it's not even close to the sweep that the Tea Party threatened last year. So this defeat of Cantor doesn't change the dynamic at all. We still have a lot of establishment Republicans in office, and we still have the Tea Party chafing and bragging about what they're gonna do. Yawn. 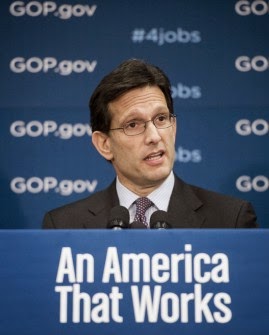 Posted by ModeratePoli at 2:58 PM

Having now found your blog I comment back to you.

Cantor's lose is symptomatic of a GOP looking for real leadership. Since 2010 the two camps with the GOP, Tea Party and Establishment have fought for control and neither side has the upper hand so to speak.

Dems went through the same turmoil from the late 60's up to Clinton's arrival on the scene. Anti-War, trickle down economics, lighthouse on hill foreign affairs, low taxes, and the list goes on. But they didn't gel around a leader until ...... and the GOP tried to impeach him, as you recall.

I for one keep looking for a leader that will look out for ALL Americans, not just slices of them. You've read such before on my own blog.

@anson, right now it's hard for one person to be the leader of all Republicans, much less all Americans.

There's the same problem in the Democratic party, where the progressive faction is stronger in balloting and as election workers, if not in numbers. The Clintons dominance didn't last, as I wrote. They may haven't wanted to update the Democratic like Tony Blair did with Labor, but it didn't work.

I don't how who can be a leader who looks out for ALL Americans. Reagan definitely ran AGAINST certain things. Who else could be on the nomination list? If you want someone to be a leader for everyone, you'll either have to find that person or BE that person.

I wish I had the guts to run for senator of my state, and do it the way I want to--with a great deal of candor and no kowtowing. But I don't have the guts. How about you?