I've written about my support of the Simpson-Bowles plan many times, but I'm finally doing a capsule review as I've done of Obama's, Romney's, and Cain's plans. A debt-reduction commission was created by Obama in early 2010 after Congress after the Republicans in the Senate refused to give a mandate for a commission and guarantee a vote on their recommendations.

The commission was bipartisan with members from the House, Senate, business, and economic experts. They worked from April 2010 until December 2010. In the end, 11 of 18 commission supported the report, with the dissenters split nearly equally between Dems and Repubs. (Thanks, Wikipedia, for this background.)

This plan is actually very readable with all major recommendations put into categories and bullet pointed, like this:


RECOMMENDATION 1.1: CAP DISCRETIONARY SPENDING THROUGH 2020. Hold spending in 2012 equal to or lower than spending in 2011, and return spending to pre-crisis 2008 levels in real terms in 2013. Limit future spending growth to half the projected inflation rate through 2020.

Budget Cuts
Roll back discretionary spending to $688 billion for security and $410 billion for non-security spending. Let agency heads recommend the budget reductions for their department; Congress will not be allowed to micromanage and protect a fiefdom.

Eliminate most deductions. All dividend and capital gains will be taxed as the same rate as earned income. The commission offered three choices to determine which brackets to establish:


Enforcement
Cut spending somewhat gradually. Start tax increases after first year of substantial spending cuts. The CBO will score spending bills and send them  back to committee when they exceed the allotment for their category of spending. OMB can require across the board cuts if Congress passes offending bills.

An appointed ongoing committee will recommend 2% cuts every year by identifying programs that are no longer needed or not working as planned. They will also recommend consolidation of redundant programs.

No off-budget spending for wars.

Congress will define what constitutes "emergency" and "disaster" spending. They will establish a special fund for disaster relief based on 10 year average. 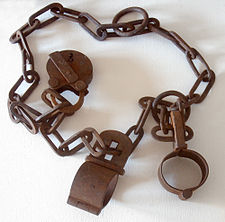 My Critique
It's a  great plan. I think the exemptions are a bit low. It doesn't zero out the deficit in its ten-year projection, which I think should be a goal in any plan because we can't pay down our debt until we have a zero deficit. Those are my two specific criticisms. That doesn't decrease my awe at the achievement of the commission. They were actually able to reach agreement in many areas:
The one area where they couldn't reach a final agreement was tax reform, and even then, they agreed on a framework and three workable options within that framework. Whittling tax reform plans down to option A, B, or C, and getting agreement to present just those options is still a solid achievement.

You can compare the Simpson-Bowles plan to mine, but I wish you wouldn't. On the other hand, go ahead and compare it to Romney's plan and Obama's plan. For laughs, compare it to Cain's plan. Remember when he was the frontrunner?

Within the first 4 years of the plan, we reduce our deficit to 2.3% of GDP, then down to 0.8% by 2025. In the meantime, normal growth in GDP will make our debt smaller as a percent of the economy. 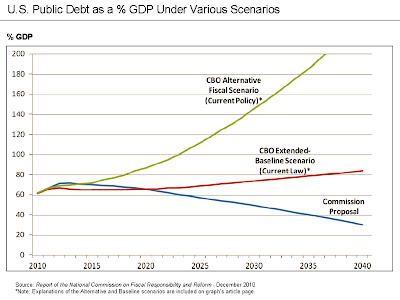 Edit 12/27/11. Added my second criticism, that the plan didn't zero out the deficit.
Posted by ModeratePoli at 9:12 PM