Should Zimmerman have been tried?

So it's more than the acquittal that prompts this outcry. Many believe that the charges against Zimmerman were trumped up, that it clearly was self-defense, and that Zimmerman was charged and put through this ordeal merely to placate race baiters and their mobs.

"First, I believe all the fury over this case is the product of (a) the media and (b) the racists in the black community." -- blog comment

It's not that there's no evidence for this viewpoint. Definitely the case went forward because of media pressure (also known as reporting) and because of  demonstrations in the black community and the involvement of black political leaders such as Jesse Jackson and Al Sharpton.

The Martin family felt that the investigation had been too cursory. The lead detective agreed, the police chief and local prosecutor did not. Those against bringing charges felt there was not enough evidence for a conviction, which was born out. However, was there enough evidence to bring the case to a grand jury?

From what I saw, yes, there was plenty for evidence. The people who say Zimmerman shouldn't have been tried  have to ignore a lot of evidence, which they do. They tend to focus on the media and what they call racial hucksterism.

It's a losing argument to claim there was no media frenzy or race baiting. Why? Because there was some, so the proponents of this argument have examples to point to. However, it is unfair and impossible to demand that an issue have NO associated media hype or political grandstanding. You really can't defeat the argument that "it's all based on political X." That argument is not disprovable, but it also makes it suspect.

So instead, I would hammer away at the non-political and non-hyped reasons why it was right to try Zimmerman. Like he shot an unarmed, non-burglar in his neighborhood. Like his story of what happened contains a lot of dubious claims, such as being punched in the nose 25-30 times. Besides, we usually want the deceased and their family to get to see some justice. Gee, I don't think I had to mention race once in this short list.

So I strongly contend that it was right to try Zimmerman. I was surprised to find out that Zimmerman, or at least his lawyer, agreed that he should go to trial. His lawyer, Mark O'Mara, waived his right to a Stand-your-ground hearing, clearing the way to go to trial.

So, among those who think Zimmerman should go to trial is Zimmerman's own lawyer. I guess that answers the question I started with. Do I get to say QED? 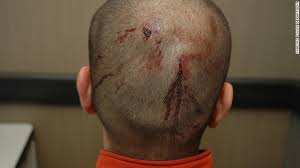 ...a head (not) slammed about a dozen times onto the cement sidewalk.
Image: everywhere

Posted by ModeratePoli at 9:28 PM

The judge, who did an excellent profession job throughout the trial, agrees with you. If it never should have gone to trial, she would have granted the defense's motion to a directed verdict at the end of the state's case.

There are also several indisputable facts that would lead me as a juror to conclude beyond a reasonable doubt that Zimmerman acted recklessly. I don't know if that is sufficient legally to overcome a claim of self-defense for manslaughter, but based on the jury instructions I think it might.

Second, the evidence is quite clear that Zimmerman did not identify himself to Martin as a neighborhood watch person when first confronting him, no matter the circumstances. I can not imagine any circumstance where either party would be in danger if Zimmerman's first words are "Excuse me. I'm George Zimmerman with neighborhood watch and I don't know you." If he was really neighborhood watch -- rather than a vigilante and police wannabe -- he would have approached an unknown person -- whether a "suspect or not" by identifying himself.

Instead, the testimony from Martin's friend who was on the phone with him seems completely consistent with the outcome. Martin asks "Why are you following me?" Zimmerman answers: "What are you doing here?" His failure to identify himself and answering a question with a question I would find quite threatening.

Zimmerman claims he was cold-cocked, but even if true he should immediately identify himself as neighborhood watch, not a creepy person trailing Martin.

Hence, I conclude that Zimmerman is also a liar about other aspects of his story, to cover his gross incompetence in police work and/or neighborhood watch. And he killed someone as a result.

He's guilty of something. I'm not sure of what law.

You're right--it's quite clear that Zimmerman didn't identify himself as being part of neighborhood watch. He sure didn't claim it in his (unreliable) statement.

The lead investigator faulted Zimmerman for not doing so, among other things (like not staying in the car, following, etc.).

The more I look, the more lies I come across. Zimmerman claims he was on top of Martin earlier in the fight. Yeah sure, tough guy. His claims about the number of times he was punched is bogus. It makes me doubt so much of his story.

I also think (speculate) that he wanted to confront and shoot a burglar. I think he had shared this fantasy with his wife. That would make his terse message to his wife, “Just tell her I shot somebody,” more explicable.

Concerning him being guilty of something, false statement to the police is one. If he were honest, there would probably be others. But with few witnesses, his lies remain (shakily) standing.

I keep asking myself what would have happened to Mr. Martin if he had gained possession of Mr. Zimmerman's gun and during the struggle, shot him dead with it.

I am also curious about how Mr. Martin knew Mr. Zimmerman had a gun; a gun he allegedly tried to wrest from Zimmerman. It seems to me that Martin, armed only with Skittles and ice tea, would have been reluctant to attack a man he knew to be armed.

Zimmerman's account concerning the gun is something else I don't find credible, but is more likely concocted.

Zimmerman wanted to make his self-defense claims (more) justified, so he frequently increases his peril--punched 25 times, head slammed a dozen times onto the concrete, Martin reaches for his gun and telling him "You're going to die tonight." Some of this story is contradicted by the evidence of his slight wounds--much of the rest is just more cowardly blarney. In my opinion, Zimmerman is quite disgusting for concocting and maintaining these lies.

@Richard, you said you keep asking yourself a "what if." That got me to thinking what an endless stream of what if's there are in this case. We don't know the answers to them, and the scenarios we might put together reflect our own sentiments, not what actually would have happened, which is never possible to know.

I think Zimmerman lied a fair amount in his statements, but I don't KNOW it. Furthermore, I don't know his motivation. Maybe he was very scared, and the punches seemed that bad. May be that, but maybe he was also aware that he better make it sounds more clearly threatening.

See, I just don't know and can never get anywhere close to certainty.

Most of the uncertainty flows from Zimmerman NEVER facing cross-examination. First the police did not aggressively investigate his claims. And he never took the stand at his trial to tell the jury directly what happened, so his lawyers could concoct any story they wanted since the prosecution couldn't present an affirmative case of exactly what happened.

Further, elements of the defense's assertions could be supported by the "evidence", including some testimony that Zimmerman may have been at a significant disadvantage during the scuffle that one could conclude occurred. Hence, creating reasonable doubt was not particularly difficult for the defense, since Zimmerman could tell his "story" without it being directly challenged.

Self-defense is an affirmative defense. The prosecution proved that Zimmerman killed Martin; the defense stipulated to it. One fix to this problem is to place the burden of proving self-defense on the defendant, rather than forcing the prosecution to disprove it beyond a reasonable doubt. I'm not sure how that applied in Florida or this case, but I would think that as a general rule the defendant must demonstrate it was self-defense and, if based on the defendant's own account, they should have to swear to it and be subject to cross-examination.

The Constitution guarantees that someone may not be compelled to testify against themselves. However, in asserting self-defense it seems reasonable to argue that defendant is not testifying "against" his or her interests. But if the defense is going to rely at all on the defendant's assertion of self-defense, I think the law should allow for the jury to then consider that the defendant's exercising their option to decline to testify and claim self-defense can be a factor in assessing the validity of the affirmative defense.

A defendant may be able to make a self-defense claim without their own testimony under oath and subject to cross-examination. Witnesses could establish what happened in whole or part. Forensic evidence may help to substantiate other circumstances that the defense argues. And Zimmerman's lawyers ably argue these circumstances. But as a juror, I would discount ANY testimony that related back to Zimmerman's accounts of what happened, whether supported by forensic evidence or not unless that evidence was conclusive by itself.

The law in Florida may disagree, but the jury can still decide how to weigh the evidence, and infer what happened even without the prosecution proving exactly what happened or disproving the defense's theories. In that case, Zimmerman's casual demeanor after the shooting and since argues for feeling he did what he had to do -- but only in his own mind. So I get that he didn't act guilty, but probably embellished his danger to the police for any number of reasons, many stemming from the notion that he had just killed a criminal.

It's this situation which has people protesting in the streets for federal prosecution. Zimmerman shows no remorse or regret at all, despite his vast errors in judgment and action that resulted in an innocent kid being killed.