. . . chasing a fetish instead
For some unknown reason, the GOP decided to forego fiscal negotiations in the run-up to the appropriations for next year, and focus only on defunding Obamacare. They turned Obamacare into a fetish and focused all their energies on it.

Obamacare is certainly not the only political fetish. In fact, politics is full of fetishes. Each party tries to raise up their fetishes and burn those of their opponents. Here are a few fetishes off the top of my head: assault weapons ban, balanced budget amendment, green jobs, DADT, "real Americans," ...

Actually, I ran out of fetishes sooner than I would have thought. To me, a fetish is a practically useless but politically powerful piece of policy or jargon. In actuality, it doesn't matter, but politicians latch onto it for political grandstanding. Obamacare doesn't really fit this definition, since it will have real consequences, but it has been turned into a fetish because politicians have inflated its symbolism to a great degree.


Negotiate or bust
So, back to the point. Instead of doing some horse-trading on funding this and that, cutting hither and thither, the GOP has wasted months on Obamacare. They did manage to pass a bill in the House cutting 5% from the food stamp budget, but that's it. Maybe someone in the GOP (not you, Rand Paul) remembered to make up a prioritized list of other cuts, and will whip it out after the Obamacare offensive is defeated. If not, the GOP will yet again be caught out with no negotiation strategy. This happened in December '11, Feb '12, Dec '12, and March '13. When will the GOP learn?

The Dems, of course, like spending as much as they can get away with, so they aren't taking up the slack and suggesting their own cuts. Nancy Pelosi says there's nothing more to cut, but also that the Dems will work with the GOP to make government more efficient and end duplication of services. Her negotiation strategy is "you go first." This cynical strategy isn't good for the country at all, but those hopeless Republicans don't have anything better.

I hope we can get back to the situation in 2011 when the Tea Party was pushing for some real cuts, and they weren't going to back down. That was a realistic goal and it worked.

Right now they're engaged in a folly, and they seem to be throwing more energy at it than they had in 2011. Why are they flushing away their power on an unattainable goal? The only answer I have is that they don't know and don't care what is achievable and what isn't.

Perhaps we were damned lucky that they focused on budget cuts in 2011 and not Obamacare. Maybe it was just dumb luck, and not any wisdom at all. If the Tea Party chooses its goal irrationally, they are going to be a bull in a china shop until they're shot down. On the basis of 2013 vs. 2011, I'm not ready yet to declare the Tea Party totally irrational, but that's definitely on the list of possible explanations.

So, to the Tea Party, please go back to demanding some fiscal restraint. Show that your 2011 rational choice wasn't an aberration. 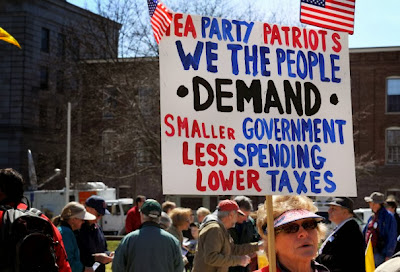 Extras. The food stamp cut mentioned above was 5% of a $80 billion budget that's doubled since 2008. The stimulus increased the grants, but that is also due to end, which may mean the total cuts are larger, perhaps on the order of 10%. The Dems are screaming about "food insecurity," which means one person in a household skipped as few as one meal a month due to food availability. Fetish, anyone?

Bernstein: GOP is "post-policy"--they have no proposals. Josh Barro complains about the lack of rational healthcare reform ideas among the GOP. Yeah, I noticed that.
Posted by ModeratePoli at 12:24 PM