So it's Sunday afternoon, and the GOP are still trying to get something (I don't know what) for the junk cards they hold in their hand. (For those you need a recap, the Bush tax cuts expire on January 1, and to a lesser extent the sequester starts.  The GOP would like to stop both, but they didn't win the presidency or the Senate, so that scrapped their plan.)

Today, the Dems refused to give the GOP the index that will allow Social Security payments to grow more slowly. The GOP will be lucky if the Dems give them a fig leaf. The GOP may have to totally capitulate and allow all the tax increases now scheduled for those earning over $250,000. Capitulation is what they did earlier this year on the 2% Social Security tax holiday.

Some conservatives are calling for letting all the tax hikes take place. This is a brave position since it won't be popular with people getting smaller paychecks. In the meantime, Democrats have been promising in two presidential campaigns to maintain those lower tax rates for the 98%. If the Republicans don't go along, they will likely be seen as the enemies of the common man at worst, or hard-nosed realists at best.

The GOP hasn't resisted the 'common man' pressure before, so I don't predict it happening now. But you never know. This is a strange time for the GOP, being on the brink of the first tax increases for over 15 years, in the era that has brought us Norquist, Rove, and the Tea Party populism.

Maybe the GOP will try something new--hard-nosed fiscal conservatism. But my money is on capitulation. I won't know how complete until we see non-core issues such as estate tax, tax rates on incomes between $250 - 400K, unemployment insurance extensions, and low income credits. 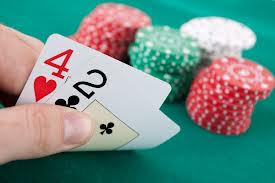 Throw in the cards, save the chips for the next round
Image: apowerpoint.blogspot.com


Correction 12/31/12. According to this article, the GOP wants to keep the sequester, and the Dems want to delay it until 2015. When I wrote that the GOP wanted to avoid the sequester, it was based on their presidential campaign stance, which was against cuts in defense spending. I remain in favor of the sequester.

Note: I first described on Dec. 22 (in comments on this post) that the GOP would end up capitulating. They're getting closer.

The House is going to vote this hour on whether to amend the Senate-negotiated deal. They need 217 votes to pass an amendment of $330 billion in spending cuts added onto the Senate bill (a package from someone's files, no doubt).

Any Republican who doesn't vote for the amendment has a target on his back and can expect a primary challenge. However, maybe enough Republicans will have the courage to defy the pack, and defeat the amendment. If so, the Senate bill as is will be (or should be) voted on and pass.

Drawn out Capitulation - Thursday
If the amendment passes, presumably the amended bill will also pass. Then it will sit untouched in the Senate--a piece of political theater that won't be going on the road.  The House will be forced to act on the Senate bill without amendment.

That didn't take long at all. Almost all of the House voted to debate the Senate bill without amendment. The Senate bill passed 257-167, with 85 GOP and 172 Dems voted yea.

Posted by ModeratePoli at 8:50 PM

The smart money would have been on capitulation with a large dose of "we won" rhetoric from the GOP. That's what we got.

Listening to the talking points, it's the tax increase "Obama wanted" while the GOP saved "permanent" tax cuts for nearly all Americans. Of course, most GOP House members voted against it, so did they vote against a tax cut?

Naturally, they want to have it both ways. GOPers who voted for it voted for a tax cut. and those who voted against it voted against a tax increase. We'll have to see how it shakes out to determine if the media truth is capitulation (looks like it now) or the latest GOP talking points.

If the Dems are politically astute, they will immediately tag the GOP as voting against a tax cut to hold them to that position. (The Dems are rarely politically astute, however.) I heard some trying to argue that the GOP actually voted for a tax increase on the wealthy, but the GOP would never agree to that intepretation (and it's factually questionable) and any Dem crowing about taming the GOP in that arena is overblown. The reason it happened quickly on Jan 1 (rather than on Dec. 31) was solely theatrical so that the GOPers would not have to replace the expiring rates with higher ones. even the Senate voted at 2am (!!) to defend that technicality.

Most House GOPers (and a few in the Senate) weren't taking any chances, however. They weren't even willing to take the chance that a 'yes' vote could be spun as agreement to a tax increase. They know the entire GOP brand is tied to the anti-tax sentiment. Their objection to spending is circumstantial and anecdotal, and only plays to their base. If the GOP isn't anti-tax, their have no public identity.

Hence, I don't think this is a good deal for Dems. It's a compromise when they had far better cards. They didn't maximize their win as the GOP always seems to accomplish. This would have been a good deal if at least some GOPers had actually voted for it before Dec. 31. That wasn't going to happen. And ask yourself: Why did the GOP let Boehner put it up for a vote on Jan. 1 even though a majority of the majority voted against it even though it would clearly pass?

@Anon, you have a strong need to twist the knife that I don't share. The "no-tax increases" policy of the GOP has been good for them, especially in comparison to the "tax-and-spend" ethos of Dems that I personally experienced quite a bit in New York.

If the Dems are smart, this will be a once-in-a-decade tax rise, not something repeated every few years. It's also good that the Dem DIDN'T maximize the tax increases. They don't really want the reputation of hoovering up as much money as they can force through. Restraint and compromise are good traits. Dems didn't get elected for saying "we want to raise taxes as much as we can," but for putting clear limits on what the taxes rises would be. Better to be a little under than to overreach, considering their reputation.

But that's the viewpoint of someone who doesn't trust Dems either. I see you as someone who would enjoy some Democratic revenge, if I'm not mistaken.

The GOP must be made to behave. For decades they have clobbered the Dems on a false premise of "tax and spend", while maintaining the illusion that the GOP supposedly stands against spending and is on the side of the public on the tax issue.

What the GOP does, when they have control, is borrow and spend, albeit on their priorities which they insist are correct while Dem priorities are wrong. Sure, they keep taxes down, or rather they tax the economy in other ways, as we found out with a vengeance in 2007-2009.

Then, when the Dems have control, all of a sudden it's back to everything being the Dem's fault based on tax and spend, not the GOP borrow and spend. Sure, the GOP plays the political game better, but that produces a worse result, not a better one.

Until the GOP accepts some blame for the circumstances when they are 75% at fault (vs. 25% for the Dems), either explicitly or tacitly by agreeing to REVERSE some of their bedrock political positions, I'm not going to expect the Dems to admit their 25% fault explicitly or implicitly. This is no-holds-barred political litigation and unless and until the public doles out political blame and consequences in reasonable proportion to reality, I'm not expecting the Dems to disarm.

If you don't win the political battle -- and you don't if you admit your 25% guilt if the other side will pummel you with that admission -- you don't get any of your policy prescriptions, even if they are better for the country.

I would be the first person to say goodbye to political considerations if the GOP would behave. They show no signs of that yet so if beating them looks like "turning the knife" to MPs like you, I'm OK with that. Consider me as counsel for the Dems in this political litigation. I'm not going to stipulate something negative for my client or, worse, favorable to my opponent simply to earn Brownie points from non-partisans. There's been decades of imbalance in that regard to my side. Balance the scales first, then talk to me about revenge.