Lessons learned from the fiscal cliff

Prepare for a surprise. I'm not going say again how blind the GOP was to the situation, and they should wake up. I'm not going to check in on reactions. Instead, I'm going to reflect.

Obama was not gracious in victory, though he wasn't triumphant either, as some in the GOP claimed. The GOP has no right to criticize Obama's manners, which are 100 times better than the average GOP politician when he talks about Obama or other Democrats. Nonetheless, more thanks and more humility would have been appropriate.

There are many things I like about deal. Obama gave the GOP a good-sized fig leaf, and didn't go for as much "soaking the rich" as his left flank wanted. Obama held to his $400K number even though he could have tried to pull back to $250K. That is good.

Obama reportedly wanted a year delay in the sequester, but let it go for the realistic 2 months. That is good.

The government won't take a 55% bite out of estates, or any bite out of smaller estates. That is good. It is also balanced. Obama is living by his oath of a balanced approach, even if it costs him the votes of the most  liberal senators and he loses some from his loudest cheering section.

I like the tone that Obama set in these negotiations. He didn't let the GOP's veto power intimidate him. If they had remained unreasonable, he wouldn't have caved. He would have let the tax increases happen. That is reinforcing the idea that actions will have their consequences, and the grown-ups aren't going to shield the children from learning their lessons.

Obama is taking a tough love approach. He has clearly put his marker down: the rest of the fiscal negotiations this year aren't going to be over-the-top partisan fights. I suspect he'll know what his best/final offer will be, and he won't go any further. Sometime (no link, alas) I heard him quote 2/3 spending cuts to 1/3 revenue increases. I think that's what he'll stick to.

In some ways, knowing someone's final number is good. But in running the US government, the idea that there is a non-negotiable final number--that may not work. The toll on the country may be huge while we're waiting for one side to cave to the other side's final offer.

Obama  is also insisting on balance. This is trickier. If Obama is saying that there won't be anymore cut-only deals, he is taking a surprisingly tough line. This would still be new territory for Republicans if they have to vote for increases to a current tax rate.

On the flip side, pushing tax increases is very dangerous for the Dems. It plays into the stereotype that Dems don't know how to restrain spending or cut back--that they have only one response, which is to raise taxes. The Democrats have yet to show that they can trim spending in anymore than a marginal way. Since the bulk of the cuts associated with the 2011 debt ceiling fight haven't yet taken effect, real belt-tightening still hasn't happened. This country wants to try a decent dose of cuts, so let's do it.


A man with a plan

For the first time since the loss of the supermajority in the Senate in 2009, Obama seems to have a solid plan. If you look at the plans of the Dems and the GOP since the 2008 election, it's a mostly pitiful collection:
Obama's current plan is an extension of the campaign platform--Don't be crazy. Moderation. Balance. However, he has added resolve to stick to moderation. I don't know what the current GOP plan is. I don't think the GOP knows either.

I like Obama's position. There are lots of pointless arguments I could've avoided if only I'd stood my ground on a reasonable plan and said no to whining and demands.

However, it's important to remember resolve doesn't work if you're resolved to do something nuts. It can work for Obama because he has a solid program--a balanced approach to the fiscal problems of this country. If he moves too far to the left, leaving the center where he is right now, then his plan won't work.


The downside of Obama's plan

I'm not at all certain Obama will be able to enforce his doctrine that deficit reduction will be balanced from this point forward. Within the next two months, Obama and the GOP have to figure out two big issues:
The GOP is sure to demand more cuts. I don't know how Obama will handle that. If he pushes for additional tax increases, I think he will fail. It's too soon for more taxes.

However, if he can show that the 2011 deal, this recent tax deal, and an early-2013 deal taken together are balanced, then he may prevail. So far, this is what I think he's trying to do. He talks about the big numbers in the deals: $1.2 trillion in cuts, $600 billion in revenue.

These numbers are good landmarks, but there is another big number. The current projected deficit for 2013 is $970 billion [CBO projection, but with fewer revenue increases]. That's too large. We need to reduce the deficit faster, but it's not clear how we can do so. We can try to trim some more spending, but that has proved very difficult. More revenue increases are also unlikely. I think we're going to hope that the economy picks up and reduces the deficit that way. Maybe it will. We are due for an upturn.

My plan would be to implement the planned spending cuts or an equivalent starting no later than March, and then reassess in June as to whether we need to enact additional cuts/revenue increases to lower the deficit. Kick the can, hope for the best, and have a firm date for the next move. That's not the worst plan ever. Sigh. Good thing I'm not president. 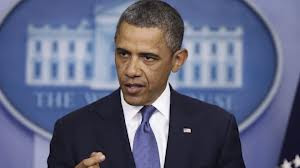 Interesting context:
Update 1/6/13. The fig leaf is still generous, but the revenue is probably higher because people between $250-450K are having their deductions limited. That can hurt more than a rate increase, but it's also one way to limit tax avoidance.

Posted by ModeratePoli at 1:48 PM

I suppose I would agree that it is a good deal. However, I suspect that the definition of good I am using is not that many people would use. That is to say, it is good in that it gets us past the crisis without doing any harm. It does not really address any long-term issues. Judging by the wailing and gnashing of teeth from a lot of the country's most prominent and vocal centrists and deficit scolds, that isn't what they were looking for (never mind the wailing on both the left and the right, which is coming from different points of inspiration).
However, a grand bargain is almost certainly unrealistic at this time, and given the reality of the situation just getting past the crisis and doing no harm, that is to say buying time for the economy to improve and time for the world to turn and events to play out, is probably okay.

We will see what will happen with the next crisis. I really don't have any idea what will happen. I guess if I had to put money on it the GOP will get some budget cuts and the Democrats will jigger them so that they hit mostly in places that the Dems don't care as much about (some defense spending, allowing expanded means testing for some entitlements with the cut-offs set pretty high, etc). If that happens the GOP will be able to claim victory, but on terms that tend to favor Obama in the end. That is they will claim they got a partial victory while he is able to look very reasonable (and while quietly telling his liberal supporters "Oh, don't be so touchy, nothing in there causes you any real pain. Just look at the demographic tables and the mortality charts and the polls of the rising youth contingent and think of all the things you are going to be able to do to the Republicans after the election of 2032 - providing we can keep things from melting down before then.")

But then, I tend to lose money on bets, which is why I don't bet very often.

I agree it was a good deal if you're a Democrat because there were no spending cuts. And it was a good deal if you are NASCAR or a movie studio. But I'm not sure I agree with Anastasios that the bill did no harm. If I had to bet, I would wager that the deal will have a negative impact to economic growth as the resetting of the payroll tax is going to hurt a great percentage of individuals.

The problem in Washington is nobody is talking about economic growth. MP is at least hoping it picks up, but we need to do more than hope. We need to come up with ideas that will grow the pie.

Your prediction for the next crisis sounds pretty likely to me. I don't know how to say this diplomatically, but one of the best things about victory of the Tea Party is that liberal Dems saw how quickly they could be ushered out of office. They probably didn't change their thinking, but they have moderated their actions. That's why I don't trust them and want divided government to continue.

@Bob, no details in your post. Doesn't leave anything to discuss.

Sorry you don't like my "lack of details". I was replying to Anastasio's post which I didn't think had "details" either but raised some interesting points.