It's going to be slow on the political fronts for a while, but I like that because it gives me more time to reflect. So I started wondering whether a lot of libertarian made good on their threat to stay home in November. I couldn't find anything definitive. Supposedly the "white" vote was lower, but no one can be sure why. Obama had very good GOTV (get out the vote) operations, which the Dems hope he'll keep stoked in the future.

I found a very interesting conservative blogger in my search for info.  He likes to dig into the demographics, but yet he fell for the same tales that other conservatives swallowed--that the polling data was skewed, that Romney had a great ground game (with lots of contacts with potential voters), that people couldn't possibly want four more years of Obama. So there's an interesting mix of hard realism about the fight in Ohio and an optimistic prediction of 331 electoral votes for Romney, including Pennsylvania. His write-up on white voters made me want to read more, so I dug into his general posts and his columns. Unfortunately he makes the usual partisan mistake of underestimating the weaknesses of his side (vague numbers and policies) and overestimating the faults of the other side (terrible economic policies).

When you read about demographics, you'd think the GOP couldn't win another presidential election. Yet the GOP has clear majorities in 27 state capitols compared to Democrats with 19 states. At the state level, the GOP is stronger on reform and budget restraint.

You would think the general electorate would want some of that in the federal government, wouldn't you? I do, so I'm not writing off the GOP nationally. However, they have to figure out how to translate policy success at the state level to the national level, and they haven't done that yet. Not even close. 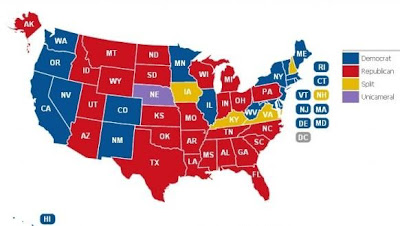 Posted by ModeratePoli at 2:18 PM

1) All states are not created equal. We have a lot of big states with very few people and some small states with large populations. The GOP "controls" lots of units and territory, but in terms of people living in areas of GOP versus Dem "rule" I suspect the numbers are much more even. This is especially true if we make allowances for divided government, as in New Jersey. This partially accounts for the difference in the levels of government, as many geographically large red states are relatively weak in electoral clout and other kinds of federal influence, whereas many geographically smaller blue states are very strong in those things. That is, I think, part of what flummoxes conservatives. The map looks like a sea of red, but it's a Dead Sea with very few fish for its size.

2) People look to state and federal government for different things and think about them in different ways. I have friends in Wisconsin who supported Scott Walker and think he's a good governor, but when I mentioned him as a presidential contender they guffawed and said "Scott's been good in Madison but we don't need anybody like him in the White House. Obama is the kind of guy we need for that." From the other direction, lots of folks in my own state of Maryland, including me, think O'Malley has been a very good governor, but think we need someone more like Andrew Cuomo or Hillary Clinton, or some would say Chris Christie, in Washington.

Re your first point, I thought of that, so I checked the electoral college power of the red states. It's 295 votes vs. 212 for the blue states. (Roughly--my math didn't add up quite right, but I didn't want to do it again.)

Re your second point, can you elaborate? How are O'Malley or Scott good for a state but not for the nation? I can speculate, but I'd rather learn what you're hearing from folks.

I think a lot of people see state and local government as being about practical business such as getting the road paved, running the school system, and enforcing the criminal law. Washington, on the other hand, is about grander visions of society and the world, and I think people really do see the entitlements the federal government provides as being part of such a vision, even though they are also, obviously of immense practical impact in people's lives.

So, when Walker talks about needed budget balancing in Madison, many nod and say "Yes, only smart business." but when you talk about sending him to the White House they say "No sir. We have a basic sense of the kind of society we want, and those policies do not fit with it." in a very real sense Walker and his policies just are not grand enough, and do not fit people's vision of the country. Same with O'Malley coming from another side. Good sense of what's right for Maryland, but do we want him dealing with Al Qaeda? Once again, Washington is just a different place from Annapolis, and we are not sure that O'Malley really fits the bill.

Oh, your point about the electoral vote of course brings us to the issue of electoral college changes being proposed by the GOP, as several states that are Red on this map are Blue on Presidential maps, due to extreme concentration of Democratic votes in urban districts. Pennsylvania is a great example of that, where the lines for the legislature favor rural GOP areas whereas a statewide vote brings out the strength of Pittsburg and Philadelphia. Thus I will rephrase my point to say that if you compare the population of state's that lean red for the presidency to those that lean blue fir the presidency, the numbers are more even than one might think. Once again, the issue of Democratic clustering in urban areas probably accounts for the lion's share of the phenomenon.

@Anastasios, thanks for answering my question. More information from more sources = good.

You are welcome, MP. I will add another observation from the town I grew up in, located in the rural South. People there are strong Red Staters and support low taxes and balanced budgets, fiercely so on the state and local level. But they also fiercely support social programs for the old and poor (especially, I must sadly admit, if the poor are also white). They believe that if the state government, being good businessmen, cannot find the money for these things, and for education, roads, and other such, it is the place of Washington to step up and provide. When asked how Washington is supposed to do so when state and local government cannot or will not, they will inevitably grumble and squirm and mutter about waste and "giving it all away overseas.". If pressed really hard to the point of anger, they will say something about "they ought to take some money from all those rich people in New York and leave us poor folks alone!". Washington, you see, is a place that ought to work by home town values, except of course in matters that have to do with maintaining society (as they understand it) when it isn't like home at all. My own Mother, during the battle over the ACA, objected to Medicare cuts with "we need that money and we were promised that money. If they want to do other things they could get the money for it somewhere else.". When I objected she said angrily "They can help people if they wanted to! They just don't want to!". And this is a woman who was a local government treasurer for twenty years. Washington, you see, is a magical place where the rules of the state and county do not apply.