I've been expecting some changes in Fox News. The spark for this thought was a comment on Plain Blog:


...Limbaugh's show will embrace diversity iff he can add at least one new diverse listener for each angry white guy that leaves in disgust. -- CSH

I replied that it was possible for Fox News, but highly unlikely for Limbaugh. The path for Fox News would be more anchors like Shep Smith and different marching orders for most of the Fox talking zombies, who are too numerous to name.


Orders from the Top
That Fox News runs on marching orders dictated on high is well documented, besides being obvious from viewing. (Just one example from my viewing: Joe Trippi, a Democratic campaign manager, talked about the Romney campaign without ever mentioning doubts about whether Romney tax reform math actually adds up. Why would he pass up that opportunity, except that he can't if he wants to keep his regular paid gig?)

Fox News blew their election predictions. Their followers, naturally, are angry for being misled, especially since they were pancaked by election reality. The head of Fox News, Roger Ailes, is not going to take the fall for this when he has massive numbers of talking heads that he can blame.


Scapegoats
How did he choose Karl Rove and Dick Morris? I'm not sure. Karl Rove famously had a meltdown in election night and questioned the calling of Ohio. But note that Megan Kelly, not exactly the most independently minded host, pushed back hard, allegedly on orders from Roger Ailes.

I don't know what Dick Morris's particular offense was, unless it was always being a grotesquely inflated hateful windbag. In this appearance on Hannity on Nov. 12, you can see Fox backing away from Dick Morris.


The Real Fox News
Is Fox News starting its makeover? I'm guessing yes, but it's just a hunch. If their audience comes to realize that Fox is nothing but unreliable propaganda that leaves them unprepared for reality, that audience is likely to desert Fox in significant numbers. That is not a good business model, and the Fox broadcasting empire is principally about profit, not political ideology.

How do I know this? Because I saw their lineup of programs from the very beginning. It was low-brow and profitable, definitely far removed from any lofty ideals. I remember Married With Children. Its high purpose was to earn money, and that's what Fox News is for too. Anyone who thinks Fox News is just an extension of the Republican Party is forgetting first principles. 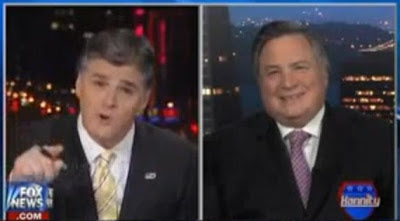 Update 12/6/12. The Fox chief White House reporter says that some of the Fox guys have pushed the Benghazi too far. He also says that he personally doesn't follow marching orders. Um, yes to the first, LOL to the second.

This is a comment I published on Atlantic yesterday:

But I also have a pet theory that Fox needs to steer its viewers and the conservative center of gravity to a more realistic place. If they don't, the Republicans will keep losing elections and Fox will lose influence and viewers. Rebranding is not necessary for just the GOP, it's also necessary for Fox News.

Update 5/10/16. Since this is in my top 10, it's still viewed fairly regularly. Therefore, it makes sense for me to point out that my prediction was way off. The fare at Fox News hasn't changed--still fodder for the angry conservative.
Posted by ModeratePoli at 11:12 PM

Since the political leaning of FOX network ownership is far Right (though not looney Right), it was natural that their 24-hours newsy-tainment channel would look to corner that market, which is larger and more reliable (and more easily convinced) than the one that prefers MSNBC.

I suspect they will continue to serve that audience, albeit with a little more professionalism and realistic coverage of events and presentation of opinion. I'm still not going to watch, but there may be far fewer FOX NEWS moments making their way on MSNBC for snarky rebuttals; the rebuttals will come on the FOX programs themselves.