Short: Inside the fake hope of a Romney win

I found it hard to believe that Romney conned himself into believing he would win. Here is a much-cited article about his campaign's own polling. Even according to his own polls, Romney wouldn't have won, but it would've been closer.

Interesting reading, but it changes nothing. Individual polls aren't reliable, but aggregating helps. Getting out the vote, which Obama's organization did very well, is the best way to win in a close election. It also helps to have a larger potential base, that is, fewer people whom you've pissed off during the campaign. 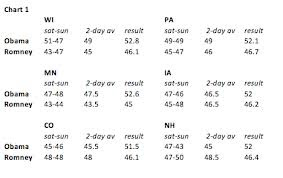 It would appear that Mr. Romney succumbed to the old mantra that money could buy votes. Apparently, just not enough votes!