I like to write about significant issues, not the outrage du jour (currently whether or not the White House threatened Bob Woodward and all the petty partisan point-scoring around that non-issue).

So I won't be writing much for a while. It's strange to have written almost 400 posts, and now have nothing to say. But I don't want to endlessly repeat my complaint that neither party will seize the wide-open middle ground and actually propose a centrist spending plan.

Here's what will happen with the biggest issue in Washington, the federal  government budget:
THIS IS PITIFUL. Our elected officials have reduced themselves to one decision: how long to keep the status quo going. We aren't getting much for the salaries we pay them.

The only silver lining is that neither the GOP nor the Dems can implement their respective destructive programs. So these doldrums are the price for avoiding the catastrophe we'd have from following one or the other partisan fantasy. I can live with that, but I'll need a new hobby since blogging on politics will be mighty sparse. Suggestions? 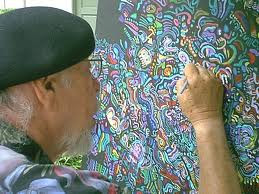 Extra. There is still one blogger who's doing well. Kudos to Jonathan Bernstein at Plain Blog (a good example here).

Update 3/17/13. The length of the Continuing Resolution isn't even in doubt. It will be 6 months, which takes us to the start of the 2014 fiscal year.
Posted by ModeratePoli at 3:05 PM

MP, when you write posts like this I can't help but think about this Monty Python sketch:

Policy is not in a vacuum. The VOTERS hate taxes and the VOTERS hate cuts to programs that don't serve them. Plus the current administration has to contend with a decade of excess of two unpaid wars and massive tax cuts that benefitted mostly the very wealthy -- making them even wealthier and more powerful!!

Meanwhile, the current GOP doesn't want to take ANY responsibility for their role in that mess, finding it far more convenient and rewarding to blame their current political opponents.

So are you suggesting that either party commit suicide? Of course not. You're smart, MP and you know this and while you might reward political courage, it will only last as long as the next election when that courage results in the party that demonstrates it getting their heads or other body parts blown to bits.

We get splunge because we demand splunge.

@Dangerous, well, you've just described how this country will never improve. However, that goes against the evidence that we have faced up to difficult situations and resolved them, albeit with a fair amount of delay and mess.

I also see signs that a lot of the electorate is not as stupid as you portray them. They didn't buy into the "more tax cuts" solution offered by the GOP. In fact, they prefer the "soak the rich" approach, but only to support programs they like, not to support the whole Democratic wishlist.

Perhaps you've mistaken what I'd like the parties to do. I'm not asking either party to come up an austerity package that massively reduces federal spending. The sequester isn't austerity--it's moderate cuts that actually leaves the spending almost exactly level with 2012 spending.

I think that's a good approach. We can see how the economy handles these cuts and decide the next step. We can also be quietly making up alternative plans for that next step.

Do you really think that the electorate will blow apart any politician who puts together a list of spending cuts? I'm not sure what behavior you think is dangerous, versus what would be accepted. Please clarify.

Interestingly, most of the Dem wish list the public supports overwhelmingly. The GOP wish list from a decade ago and still now? Not so much.

Did I miss anything?

@Dangerous, I think you cherry-picked your quoted items from theDem wishlist.

I agree with the ones you wrote, but will add in: more red tape on hydrocarbon development; increases, not cuts to poverty programs; no cuts in federal workforce, but employment shifts to research and social programs; cuts in Defense and subsidies to big business A-OK.

So, do you agree that those are part of the Dem wishlist?

By the way, you still owe me a clarification on what dangerous behavior you think the electorate will severely punish. I expect an answer.

Sure, MP. Busy today so sorry for the partial response. Yes, the history has been that politicians who proscribe painful or unpopular cuts or tax increases are easy targets for well-funded opponents in unsafe seats. An opponent just has to make that politician take the blame on election day, whether the benefits would accrue to the voters later or not.

Most political posturing you hate so much is a reflection of that reality. Short-term trumps long-term whether the overall benefits outweigh the costs or not. We are talking about swing voting patterns that could decide an election, not every voter, of course. The Dems crushed the GOP in 2012 with Paul Ryan's plan, so, yes, making a list is tantamount to political suicide unless your seat is completely safe.

Of course, at the same time the GOP tried to tag the Dems with Medicare "cuts", proposed cuts in defense, and ANY tax increase. Obama and the Dems could only muster a majority of voters by screaming at the top of their lungs that only the wealthy would take a hit; they dared not call for rescind all of the tax cuts from the 2000s. They remembered 1994.

On the wish list, I think you have it right, but spun via the language you used. "Red tape" on carbon-based energy development might be rephrased fairly as full-cost-recognition of carbon-based energy. "No cuts in federal workforce" should probably be refocused federal resources. I'm sure the administration is looking for efficiencies at least as aggressively as any. Recall that in any large organization there's always plenty of fat to trim, but there's politics involved there, too.

In terms of poverty programs, I think there is a Dem priority there and they got it done substantially with HCA. So it's not much of a wishlist item.

Have a nice vacation!

"...the administration is looking for efficiencies at least as aggressively as any." Yeah, that's what I think too, and it has me worried. When has any administration tried really hard to trim.

On your other points... Maybe just the list killed Ryan, or maybe it was a bigger combination, like choosing to voucherize Medicare, plus not having stable numbers, plus trying to fit in tax cuts, etc. We won't be able to sort all the factors that killed that campaign.

On the Dems having to scream so loud who would have their taxes increased, yes, good point.

ACA is big in helping poor and ordinary workers, but there's more to the agenda. That's where pre-K came from, and that's just a bit of what we'd hear. But again, we won't know what items the Dems will grab if they have the chance until they actually have the chance.

I don't think the Dems ran on the promise that they'd be running stimulus-level budgets for 4 years, but they've managed too. I wish I knew where all that extra money is STILL going.