So today Reince Priebus released the report on post-mortem on how the GOP lost the 2012 election. I thought it was a surprisingly realistic first step for the GOP, who haven't been exactly clear on the objective world for the past two years.

Some ideas I agree with:
The response from parts of the conservative spectrum were much uglier than my reaction. Limbaugh says "I’m sorry, but we’re not disrespectful to anybody." HAHAHAHA. Rush is personally disrespectful to the vast majority of humanity, so let's just say that he's so acclimated to disrespect that he doesn't smell it anymore.

It looks to me as though Priebus's outreach to the Ron Paul liberty wing is falling flat. You really need to read the hair-raising comments here. They include throwing someone under a lawnmower, stabbings, kissing back sides, and a few Jew comments too. But definitely, there is no way the Paul wing is going support fewer caucuses, another Priebus proposal. The base at HotAir isn't happy either, with the general sentiment being that it's another way for the establishment to muzzle the base.

I won't tell the GOP what to do. They aren't my party, and I've learned from experience that you can't manage anyone else's life from the outside. I hope they make decisions that are beneficial for them and for the country as a whole, whatever those decisions will be. So, best of luck, GOP. Try not to screw it up. 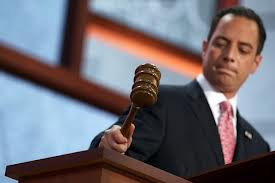 How the hell do I fix this?
Image: go.bloomberg.com


Extras. An insider at The Weekly Standard has written a moderate-length analysis of the GOP problem with a suggested, but unlikely, solution. A shorter version here to whet your interest.

The HotAir bloggers support the gist of the post-mortem. The commenters want to hang the traitors to GOP principles.

Erick Erickson at RedState: 'Meh. It just wasn't our year.' This response confuses me because it's completely anti-analytical.
Posted by ModeratePoli at 11:32 PM