Tea Party to GOP: Fight this one!

There is somewhat of an internal GOP struggle over how the GOP in Congress should handle the next fiscal crisis point, which is March 27 when the most recent appropriations bills time out. Many in the Tea Party are urging the GOP leadership to demand additional spending cuts and especially reforms of Social Security and Medicare as the price for passing a Continuing Resolution.

The GOP leadership seems to be trying to avoid blame. It doesn't want the blame for shutting down government operations, which is what would happen if the GOP makes any new demands. But they also don't want to face primary challenges from Tea Party-backed candidates, so they have to look tough.

Boehner is walking a tight rope on this issue, and many will be watching and wondering whether he'll make it to the other platform or whether he'll plunge off the line and into either an abyss or a safety net. I'm predicting that he gets to the other side, much to the chagrin of the Tea Party. The other side is the totally predictable status quo appropriation--no cuts, no revenue increases.

Perhaps the more interesting show will be what the Tea Party does this month and during the next year. They've been agitating for spending cuts and entitlement reform, but their only success was the mixed blessing of the sequester. After its losses in the election, does the Tea Party have any strength left to effect fiscal changes, or only to scare GOP congressmen? I'm betting they spent their influence for too little fiscal restraint, but they'll still be the most frightening boogeymen to GOP pols for a while yet. 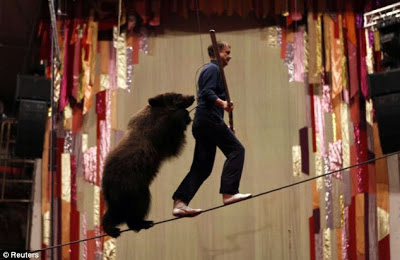 Hmmm. It may be more likely that we get a relatively clean CR and the fight gets carried over to the appropriations cycle and the debt ceiling. But your point is well taken.

Now, on the other hand that does bring up the issue of, as you put it, why neither party embraces the broad middle. Leaving aside the question of what that middle us (and I tend to agree with Dangerous that the center harbors all kinds of contradictory notions) the problem is much harder than just finding a good Presidential candidate. That is step one. Then you have to get a majority in the House and a supermajority in the Senate to go along. Good luck on that. The GOP is afraid of the Tea Party and the Dems increasingly represent dense urban districts that in effect require large scale subsidies to be livable (the GOP has some problems of its own with large rural districts that require subsidies ofa different kind). Such a polity might support centrist policies, however they are defined, given enough social trust. But the great crisis of our times is that social trust has eroded to the point that people no longer think basic social solidarity can overcome widely divergent economic and political interests. One also must point out that, unfortunate as it may be, demographic change playsa role as well. Many of the ascending groups in America have never felt that they could trust in the basic goodwill of the social system.

Maybe I wasn't clear, but I think the ultimate result will be a clean CR, because that's all the Dems will accept.